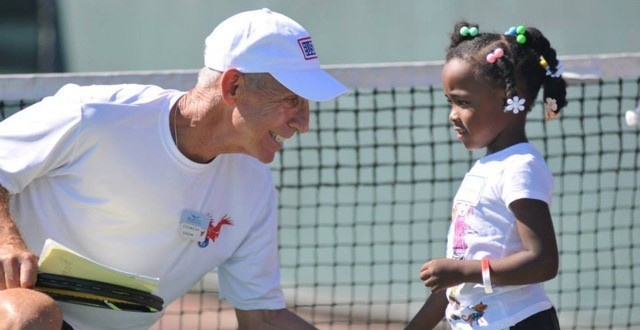 “It was especially gratifying to see so many youth participating in the sport, many for the first time …”

They’re all talking about Thanking our Troops through Tennis (T3), a free event for active-duty, veterans, Wounded Warriors and their families founded by former American tennis star Dick Stockton and his wife, Liz, and coming to Jacksonville University March 27-28. Their son, Spencer Stockton, is a JU freshman, Sport Business major and member of the JU Dolphins baseball team.

Stockton’s Blue Sky Foundation has provided successful free tennis clinics at military installations across the United States and is now bringing the event to a university campus for the first time. He and other tennis legends provide the clinics to give back to the military. This year, JoAnne Russell and MaliVai Washington have already committed to the event at JU.

“In the fall of 2012, I heard a promotion for a touch football game in Arizona that was raising funds for Wounded Warriors,” said Stockton. “My immediate reaction was, ‘Why are we not doing something like this with tennis?’ I brought the matter up with my wife, and together, we came up with the idea of traveling to military bases and offering a fun, stress-free afternoon of free tennis clinics to active personnel, spouses, children, Veterans and Wounded Warriors. Since July 2013 we have held seven events at five different military installations. The response has been incredible; we are averaging about 125 participants per event, and they have ranged in age from three to 87. We have eight events scheduled for this year.”

Help spread the word about this wonderful event so our local active-duty military, veterans and their families have a chance to take part. More details follow:

Thanking our Troops through Tennis at Jacksonville University

Who: Blue Sky is headed by Dick Stockton, who won eight singles and 16 doubles titles in his career, including mixed doubles titles at both the U.S. and French Opens. He is a Davis Cup winner and during his career had victories over Arthur Ashe, Bjorn Borg, Jimmy Connors, Rod Laver, John McEnroe, John Newcombe and Ken Rosewall, among others. More information/registration: Blue Sky Foundation at dickstockton@att.net, (561) 371-0036. See www.theblueskyfoundation.com for more about the nonprofit, and get information and register for the JU T3 event at http://www.T3Jacksonville2015.eventbrite.com. “It was especially gratifying to see so many youth participating in the sport, many for the first time … We can’t say enough about the selfless attitude, kind heart and giving spirit of T3 pros that made this event a huge hit. For installations out there fortunate enough to be offered this opportunity, jump all over it and be ready for some incredible fun.”

“I have never stood that close to a Wimbledon Champion in my life or been instructed by such incredible athletes. … It was incredible to see such talented and caring athletes take the time to take care of soldiers and their families. We may not have produced any future LIT A champions, but we could have, or at least planted some seeds for a lifetime of enjoyment and fun in tennis.”

“The reverberation of the event still echoes across the tennis center at Fort Jackson as the rallying cry is, ‘will there be another such event?’ The Fort Jackson community thanks Dick and Liz Stockton and their volunteers for their extreme efforts. As you reach out to our warriors and their families to offer a gesture of gratitude to the multiple families and soldiers who serve this great nation, we salute you.”