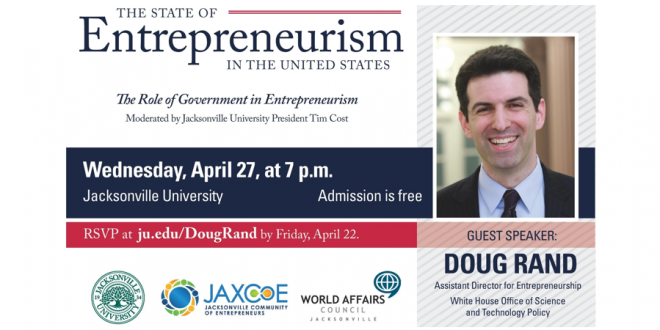 UPDATED: Watch the full video of Doug Rand’s April 27 presentation at JU on “The State of Entrepreneurism in the United States” below:

Doug Rand, Assistant Director for Entrepreneurship at the White House Office of Science and Technology, will speak Wednesday, April 27, at JU about “The State of Entrepreneurism in the United States” and the role of the federal government in promoting and supporting it.

Rand has Jacksonville roots, and will take part in a discussion and public Q&A at 7 p.m. in Terry Concert Hall moderated by President Tim Cost, in a chat format that has become a tradition for JU. The event is co-hosted by Jacksonville University,  Jacksonville Community of Entrepreneurs (“JaxCoE”) and the World Affairs Council. It is free to the public, with RSVP required.

As the Assistant Director for Entrepreneurship at the White House Office of Science and Technology Policy (@WhiteHouseOSTP), Rand focuses on the Startup America initiative and efforts to promote entrepreneurship across the country.

Prior to working at the White House, Doug served as co-founder and CEO of the innovative publishing company Playscripts Inc., as well as a co-founder of the review aggregator StageGrade. He is a graduate of Yale Law School and the Yale School of Management, and received master’s and undergraduate degrees from Harvard, where he studied evolutionary biology. As a writer, Doug’s plays have been performed worldwide, and he has published numerous articles covering subjects from theater economics to electoral politics to insect evolution.

Rand attended Duval County Public Schools and even attended a summer camp on the campus of JU as a youth.

Parking: Lot A in front of Gooding Building. Please see map at http://www.ju.edu/CampusSecurity/Forms/Campus%20Parking%20Map.pdf.

RSVP: at ju.edu/DougRand by Friday, April 22.