Home » All Sections » Unrivaled: debates hosted by Public Policy Institute and WJXT were historic in scope 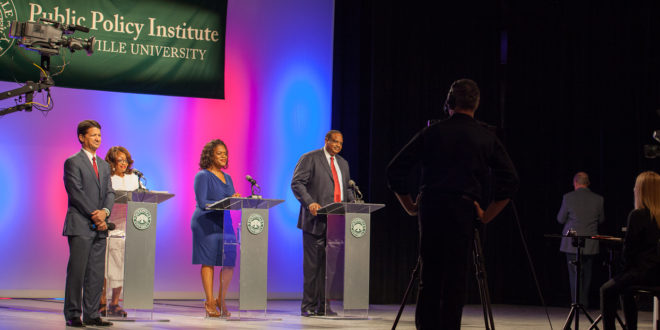 Unrivaled: debates hosted by Public Policy Institute and WJXT were historic in scope

Look up the word debate online and you’ll find a number of definitions that offer a variation on the same theme: disagreement. In retrospect, any of those would describe the historic debates hosted this election cycle by the Jacksonville University Public Policy Institute in partnership with WJXT TV-4. However, the adjectives heated, intense and even fierce would make the description even more apt for the three events that preceded the Aug. 30 primary elections.

“At the Public Policy Institute, we believe everyone’s vote matters, and these debates were designed to be informative and engaging to help the public make their choices at the ballot box,” said PPI Director Rick Mullaney. “They are so important because of the critical public policy issues facing North Florida.”

Discussing everything from taxes and education to public safety and healthcare, the candidates offered their viewpoints and experience as WJXT anchor Kent Justice moderated the three separate hour-long events, keeping sometimes emotional audiences – and occasionally combative candidates – in check.

With the dust now settled, as it turned out, the election was unlike any in Jacksonville history. It included a defining referendum, historic changes to Congressional representation, the defeat of three incumbents and the changing of the guard in the criminal justice system.

For the first time in the history of consolidated government, an incumbent State Attorney was defeated. For only the second time, an incumbent Public Defender was defeated. And U.S. Rep. Corrine Brown lost her Congressional District after serving 24 years, after a perfect storm of a redrawn district, a grand jury indictment and a formidable opponent led to her defeat.

Meanwhile, a historic referendum became the third one to pass a sales tax in Jacksonville history, this one dedicated to helping pay off public pension debt.

According to Mullaney, in the nearly 50 years since consolidation of Jacksonville’s government, only three people had served as State Attorney, excluding Don Nichols, who served for a year and a half. In addition, only three people had served in Congressional District 4, a seat that became open after U.S. Rep. Ander Crenshaw announced his retirement.

“It is very rare for any of these races to be contested. To have all three contested in one year is unprecedented,” Mullaney said.

JU was a finalist to host a 2016 Presidential debate, and Mullaney said the University is becoming a central non-partisan gathering place for public policy discussions.