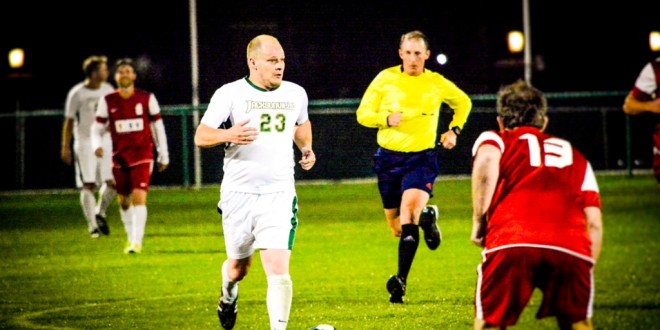 Score a goal (or three, or four) for Jacksonville University as co-host of the outstanding Florida Cup soccer events this past weekend on campus and at EverBank Field. (Photo gallery below.)

Dozens of media and hundreds of onlookers descended on Southern Oak Stadium the night of Friday, Jan. 16, to watch the Legends International Soccer Scrimmage, with star heroes from teams 1. FC Koln of Germany and Corinthians of Brazil having a go at some spirited competition.

Players like Edu Gaspar, Frederic Latz, Rudi Voller and Matthias del Piero, along with media, organizers and spectators were impressed with the quality of facilities and personnel at the University.

(Part of the JU promotional video shown at EverBank Field during the Florida Cup is below.)

Teams practiced at JU on Saturday and Sunday. The main event was Saturday, Jan. 17: The Florida Cup with Germany vs. Brazil at EverBank Field, which brought a crowd of more than 7,000 and had a potential global TV audience of more than 200 million. Team rosters included several international stars, with some who played in the 2014 World Cup.

In the first match, Corinthians defeated the German Bayer Leverkusen 2-1, while 1. FC Koln won 3-2 over Brazilian team Fluminense in the second match, which netted them the overall championship.

JU President Tim Cost, who was instrumental in bringing the Cup to Jacksonville, said the events offered an unprecedented opportunity for JU and the city to shine on a global stage.

A spectacular two-minute video highlighting JU and its offerings was shown between matches and captivated the Everbank Field crowd.

“The ability to attract super clubs known around the world shows a lot of regions that Jacksonville is a major sports city,” Cost told the Jacksonville Business Journal.

City officials say they hope to make the event a recurring one.