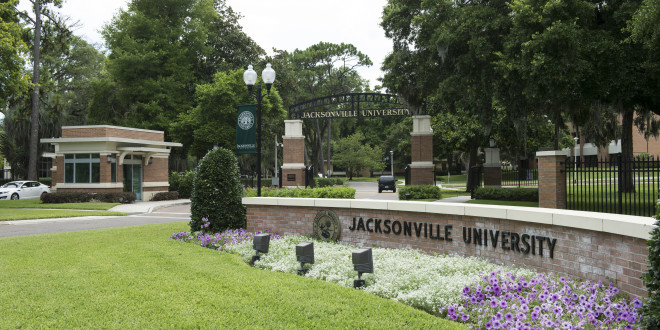 Jacksonville University has been re-accredited, in good standing, for the next decade by the Southern Association of Colleges and Schools, further solidifying its top-tier status among private Southeast universities.

The rigorous assessment involved extensive work by administrative officers, faculty, students, Trustees and staff, and included comprehensive reaffirmation research and reporting, off-site reviews, on-site visits and a final review and acceptance by the Commission on Colleges of SACS.

“This is a demanding exercise that brings important validation of our mission and values, and I’m very proud of the vast increase in quality of the University determined by the experts at SACS during this multi-year process,” said JU President Tim Cost.

The decision means the Southeast’s most prominent quality-assurance body has sanctioned JU to continue awarding bachelor’s, master’s and doctoral degrees, after JU again proved the worth of its educational mission, integrity of its academic programs and effectiveness, strength of faculty, depth of student support and health of its finances.

Under President Cost’s leadership, there has been a sharp focus on students and their outcomes, as well as a priority on high-performing faculty and programs at JU, whose student body now exceeds 4,000, its largest in many years.

Among important developments in recent months, JU gained a top 1% rank among all Florida colleges for “Return on Investment” for its graduates, made a 10th straight appearance as one of “America’s Best Colleges,” won more than $1.2 million in Nursing and other research grants and broke ground on its new College of Health Sciences building. In addition, the JU Public Policy Institute hosted the region’s premier Healthcare Policy Conference, the first undergraduate classes in Speech-Language Pathology began, and a new floating dock was installed at the JU Marine Science Research Institute for its innovative, state-of-the-art floating classroom.

“I’m very pleased that all of the hard work has paid off,” Crawford said. “This is a helpful self-evaluation, and at the end of it we come out a better institution.”