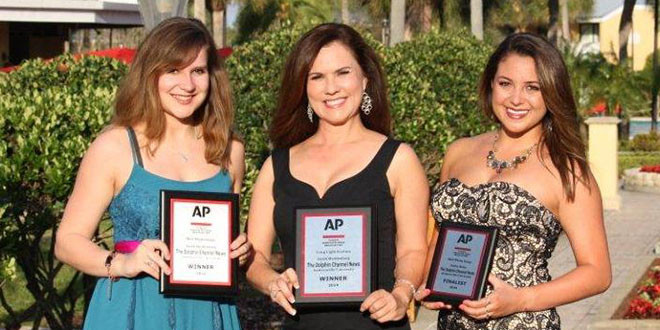 “These awards are a result of a great deal of hard work and dedication by very talented students,” said JU Communications Prof. Dr. Annmarie Kent-Willette, currently serving as Jacksonville Education Commissioner for a two-year term. “The awards are a challenge in that the Florida AP Broadcast division includes all public and private schools, regardless of size, in the same category. These awards stand as a shining example of our sustained commitment to excellence. I am so very proud of Sarah and Hayley.”

“I Believe in Determination” details Mecklenburg’s challenges after leaving her home country of Germany for school in the U.S. and then losing her track scholarship after a major injury. She leaned on the advice of her father and used hard work and determination to continue her success story.

For her documentary “The Bend of the Road,” she chronicled the life of Anthony Faggiani, a 27-year-old with cerebral palsy who is webmaster for New Heights, a Northeast Florida nonprofit that serves people with disabilities.

Toward the end of the moving 15-minute film, Faggiani implores viewers in a heartfelt plea: “Don’t be so down on yourself with the things that you can’t do. Embrace life and embrace the fact that you are on this earth, and you’re able to enjoy all the wonderful things that this life has for you. Your life is up to you; it’s only going to be what you make of it.”

In a serendipitous twist, Mecklenburg only learned of New Heights when a senior staff member visiting the JU campus one day asked her for directions.

“I was happy because I just graduated, so it’s a nice asset to have,” she told JU’s Dolphin Media. “I really wanted somebody to appreciate my documentary, and I met people there so I might actually be able to publish it somewhere on a television network, so that’s the goal, so some people see it.”

Muley, a sophomore, was recognized for her powerful video photo essay titled “I Believe in Talent,” in which she focuses on natural-given talents. In it, the musician, singer, model and actor discusses her unusual upbringing as a child performer who spent a lot of time out of school partaking in productions, auditions and casting calls.

“I was different from the other kids, and unfortunately that difference made me the target of painfully cruel bullying” not only from students but from some teachers, she recalls in the video. She transferred schools and even tried to hide her talent to fit in, but later realized she had to embrace it.

“I was really excited, I was really surprised” about the honors, Muley told Dolphin Media. “I knew my piece was strong, but I didn’t think it was strong enough to compete with the whole state of Florida, so that was a really big confidence boost.”