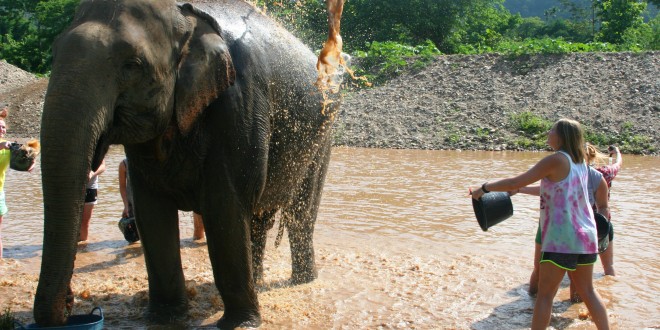 Tough and leathery on the outside, most of the inhabitants of Elephant Nature Park in northern Thailand have been abused, trekked, force-bred and injured. Lara Bushwood, a Sustainability and Geography major in the College of Arts and Sciences, got to see just how gentle and fragile they can be on the inside, after spending two weeks this summer helping in their rescue care and learning about Thai culture.

Traveling with the Boston-based Loop Abroad, Bushwood, of Owasso, Okla., was part of a small team that volunteered directly to aid the pachyderms. “It was an amazing experience to learn about the conservation efforts that are being put in place throughout Thailand,” she said.

The group spent a week at the park to work hands-on with the animals and learn about animal rescue and conservation on a larger scale. The Elephant Nature Park is home to more than 40 elephants who have been rescued from trekking, logging, or forced breeding programs. Many have been abused and suffer from chronic injuries.

At the park, they are cared for by volunteers from all over the world. Students were able to feed, bathe and care for elephants, as well as learning about their life stories. The Elephant Nature Park is also home to more than 400 dogs and 100 cats, as well as rabbits and water buffalo, and is sustained in huge part by the work of weekly volunteers like Bushwood. During her time at the Elephant Nature Park, Bushwood learned about elephant tourism and behavior. She helped with the many chores needed to run the park, such as preparing elephant food, cleaning elephant cages, chopping corn and grass to feed the elephants, and planting in the ENP’s gardens.

For the rest of her time in Thailand, Bushwood explored all aspects of Thai culture, from meeting with Buddhist monks to visiting a hill tribe village to learning to cook Thai food.