Home » Topics » Academics » Sleuthing the Keys: what (or who) is the culprit behind coral reef decline? 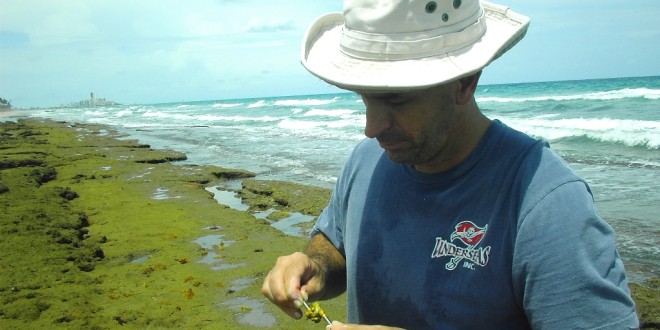 But could one of the offenders be an inhabitant and user of the reef itself? That’s a key question among many for Marine Science Prof. Dan McCarthy and two of his graduate students studying how certain fish may be helping or hurting the coral reefs so critical to marine life in the lower Florida Keys.

More specifically, and with the help of a nearly $10,000 grant awarded by new JU education partner Mote Marine Laboratory, the researchers are examining whether reefs flourish when more parrotfish are around to eat the algae that can cause coral bleaching — or, whether they are damaged by certain species of parrotfish feeding on the live coral itself.

During the research, expected to wrap up at the end of this summer, they will also look at whether coral transplants survive best depending on how and where they are placed on the reefs, and on whether or not they are protected from predatory fish by mesh cages.

“These findings have the potential to contribute toward finding solutions to help restore one of our great marine treasures,” said McCarthy, co-chair of the JU Department of Biology and Marine Science and Director of its Undergraduate Marine Science Program. McCarthy and students from the Jacksonville University Marine Science Research Institute also recently took part in a major seven-year study of nearshore artificial reefs with the help of $450,000 in funding from the Florida Department of Environmental Protection.

For the new research, JU is working with Mote Marine, a nonprofit South Florida marine science institution that announced a partnership with the University last year to benefit students, faculty and researchers. The agreement calls for Mote and JU to build new joint ventures  in teaching, mentoring undergraduate and graduate student research, conducting joint research and sharing research and education facilities and infrastructure. “I’m very excited for us to be given this opportunity to contribute to our knowledge of how fish may affect coral reefs and how coral transplants may be used to restore degraded coral reefs,” said McCarthy. “This funding supports me and our two students trailering JU’s 26-foot RV ‘Dolphin’ down to the lower keys, where we will stay at the Motes facility while we do our work.”

The grant will also has enable McCarthy, of the JU MSRI, to take a sabbatical at Mote for about two months during spring, deploying coral transplants to investigate ways to maximize their survival. The new study, titled “The Role of Fish Grazing on Coral Reefs and Restoration Efforts,” is funded under a one-year contract through the non-profit Mote Marine Laboratory’s Protect Our Reefs Grants Program, which is funded by proceeds from the sale of the Protect Our Reefs specialty license plate (https://mote.org/support/protect-our-reefs).

The results of the JU research will be combined with those of Clemson University researchers who are doing similar work in the middle keys.

“In collaborating on our data sets, it gives us more power to understand the interactions among fish, corals and algae,” McCarthy said.

McCarthy is primarily engaging his JU students to assist with field surveys, and is also receiving assistance from Mote interns. During the coral transplants experiments, when he is on sabbatical, help will be provided by his wife, JU biologist Heather McCarthy, and advice and assistance will also come from Drs. David Vaughan of Mote Marine and Michael Childress of Clemson.

Dr. Dan McCarthy received his Ph.D. in biology from King’s College-University of London in England in 2001. He is known for his expertise in benthic marine ecology near the ocean floor, and in nearshore reef ecology.