Home » All Sections » Sainthood: The History of the St. Johns River and a Perspective from more than 30 years of Research 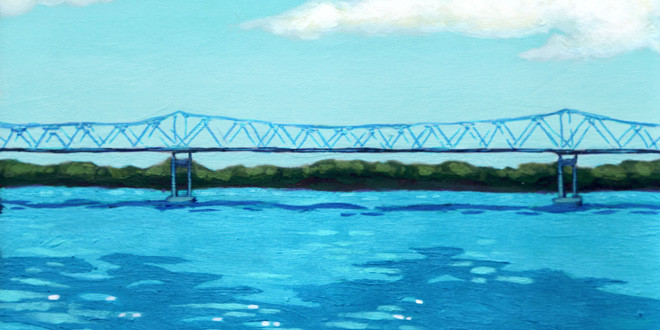 Sainthood: The History of the St. Johns River and a Perspective from more than 30 years of Research

Share
What is it about the St. Johns River that lets us enjoy it on so many levels? Maybe partly it’s because it’s just simple “water.” Except that water – especially the St. Johns – is anything but simple. We know water is essential for life, but we also seem to have a special affinity for water in so many other ways.

What is it about the St. Johns River that lets us enjoy it on so many levels? Maybe partly it’s because it’s just simple “water.” Except that water – especially the St. Johns – is anything but simple.

We know water is essential for life, but we also seem to have a special affinity for water in so many other ways. We enjoy a cool drink, or a hot shower, or a dip in the pool or ocean almost as much as watching the waves roll in on the beach, or a sunset over the river. There is just something about the St. Johns and its flowing water that intrigues us.

Many see it as the most significant natural resource in Northeast Florida and don’t understand why others don’t hold it with the same reverence. But to others, it’s just a big, dark body of water, not the lifeblood that flows through our fair city.

Few people could have imagined the St. Johns River as it is today on that first day of May in 1562 when Jean Ribault sailed into the St. Johns, and claimed for France, his “discovery” of Riviere de Mai. The shallow meandering river has changed dramatically since that time. An early map of what is now the Southeastern United States shows a small peninsula that would become Florida, but no river. That was the beginning, as far as western civilization was concerned, of what has become one of the most important environmental and economic features of Northeast Florida.

Ribault was one of the earliest explorers of this area that was already inhabited by the Timucuan Indians, but he was not the last. Others came, including John and William Bartram and John James Audubon. The Bartrams would document the plants and some animals, while Audubon would focus on the bird life in the area. Northeast Florida has a rich diversity of plants and animals due to the semi-tropical weather and the fact that the area seldom experiences the hard killing freezes found further north. William Bartram describes, complete with a drawing, an interesting encounter with alligators feeding on fish in what he called Battle Lagoon, an event that still occurs today. John Audubon includes St. Augustine in the background of his illustration of what he called the Greenshank. So the historical importance of Northeast Florida as a source of natural history information is well documented.

Most residents of Jacksonville seem to know that the early name was Cowford. For it was in the Jacksonville area that cows would cross (ford) the river. The cattle could not walk across but only had to swim a short distance in the slow moving river to reach the other side. Early maps show a shallow river where depths less than 12 to 14 feet were common. It was certainly nothing approaching the 40-42 foot dredged channel of what is now the modern St. Johns River.

Early sailors entered the mouth of the St. Johns River cautiously because of the shifting sand and meandering channel that changed with every tide and storm. Two small communities grew at the mouth of the river, populated by fishermen and bar pilots. Mayport Mills on the south bank and Pilot Town on the north, served as home to the early men who would help ships navigate the treacherous sand bars of the river. Hence the name Bar Pilots that survives until today.

It was the dangerous shifting channel that led to the earliest efforts to control the flow and channel of the river. In the late 1890s, the U.S. Army Corps of Engineers would begin construction of a pair of granite jetties to stabilize the mouth of the river so ships could safely enter and leave. But ships still require Bar Pilots even today to enter and leave the port of Jacksonville.

Projects to improve the St. Johns River for commerce began in 1892 with the dredging of the St. Johns River to a depth of 15 feet. This channel allowed ships with a 20-foot draft to dock in Jacksonville. Dredging and what is now termed “Harbor Maintenance” has continued periodically resulting in a 42-foot channel from the mouth of the river to the Talleyrand docks, a distance of approximately 21 miles.

The St. Johns is termed a “black water river” because of its dark tea color. The color comes from the same tannins that give tea its color. Various tree species such as oak, gum and cypress shed their leaves into the swamps, wetlands and marshes at the head waters of the St. Johns. Just like making iced tea, the water gradually absorbs the tannins and becomes a slightly acidic, dark liquid. The water tastes sweet, hence the name “Sweet Water” for such rivers and streams.

Early explorers looked for the dark-colored water as a sign the water was safe to drink.  They would sail upstream, periodically tasting the water until it lost its saltiness and became “sweet.” Some people confuse the dark color with pollution, but tannin is a natural product. When we talk of “pollutants,” we are usually talking about chemicals or excessive nutrients introduced into the water.

Florida has been blessed with an abundance of water, but that can cause us to take it for granted. Early settlers in Northeast Florida saw the river as an easy way to get rid of waste. The prevailing thought was that we needed to drain the swamps and wetlands and get the water that ran off our houses, roads and parking lots into the river as quickly as possible. People saw the river flowing into the ocean, taking our waste and excessive runoff with it. We didn’t understand that its ebb and flow traps the chemicals and nutrients in the river sediment.

Only in the mid-20th Century was it realized how important those same swamps and wetlands that we drained in the 19th Century are to the overall health of the entire ecosystem. One of the least understood but critically important features of the St. Johns River, they act like kidneys, filtering water and keeping the system functioning properly.

These areas go by a variety of names depending on where they are located, including bogs, marshes, lowlands, bayous, swamps and the Everglades. As the name implies, these are lands that are periodically flooded with water. The vegetation is uniquely adapted to this inundation by either freshwater or saltwater depending on the location.

As we did not understand how these wetlands functioned, we saw them as a worthless waste of potentially useful land. So we dredged and filled them, initially out of ignorance but eventually out of greed, to make usable dry land for development. And while we have slowed the rate at which we are destroying wetlands, they continue to disappear in our quest for usable land.

As our understanding of wetland ecology began to deepen, we recognized the importance of these unique ecological systems to the overall health and productivity of our rivers, streams and oceans. They serve as major sources of food for the marine and freshwater species that call our river and marshes home. Salt marshes associated with estuaries serve as nursery grounds for 90 to 95 percent of our commercially important marine life, such as shrimp, blue crabs, oysters, and numerous fish species.

Another important function of our wetlands is flood and drought control. The soils associated with the vegetation in wetland systems can hold a large amount of water. When we have heavy rainfall events, these soils act like sponges and absorb the water, slowing down the runoff and reducing flooding downstream. And when there is a lack of rainfall, these same soils slowly release water to lessen the impact of the drought. This sponge effect is tremendously important to Florida ecology and our native plants.

The construction of the Jacksonville University Marine Science Research Institute in 2010 opened up new opportunities for research on the St. Johns River. We established a Masters-level graduate program in 2011. Faculty, undergraduate and now graduate students research manatees, dolphins, oyster reefs, near-shore artificial reef habitats and St. Johns River water quality and other topics. We are also now the site for a NOAA Physical Oceanographic Real Time Sensor (PORTS) that is providing us with almost real-time data on salinity, temperature, water level and currents in the St. Johns River.

Today our river bears little resemblance to Ribault’s Rivière de Mai, though it continues to be a critical economic and environmental asset to Florida. It is home to numerous species of plants and animals, each adapted to living in the river’s ever-changing water. And though complex and a challenge to fully understand, it is that challenge of discovering how the river functions that makes it fascinating and all the more enjoyable for the scholar and general public alike.

Quinton White is a Professor of Marine Science and Executive Director of the Jacksonville University Marine Science Research Institute, a LEED Gold certified 32,000 sq. ft. facility that opened in 2010. Dr. White received his B.S. degree from N.C. Wesleyan College, his M.S. degree from the University of Virginia, and completed his Ph.D. at the University of South Carolina at the Baruch Institute for Marine Biology and Coastal Research. Dr. White joined the faculty at Jacksonville University in 1976 and remains active in marine science education, and research concerning the St. Johns River and the impact of man on marine ecosystems. Dr. White serves as a consultant with the City of Jacksonville Waterways Commission on manatee and water quality issues.