Home » All Sections » Sailing Team headed back to National Championship 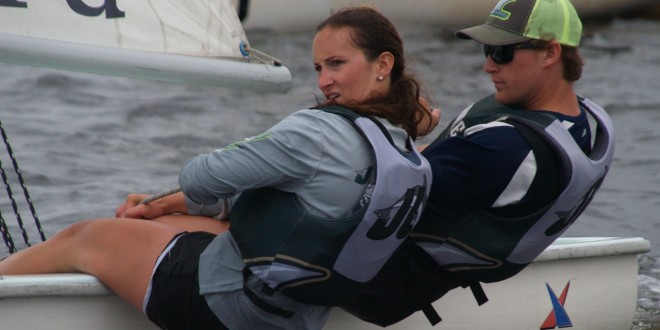 The JU Sailing Team has again made it into the College Sailing National Championship, one of only 36 college teams out of 250 nationally to qualify. That’s an impressive two bids to the marquee event in only three years’ existence as a collegiate varsity sailing team.

After finishing fourth in conference in 2014 and competing in nationals for the first time, the sailing team hit the waters with high hopes for this year’s season. Returning sailors Danny Lawless and Hannah Knighton (sophomores) got off to a great start at the May 2 South Atlantic Inter-Collegiate Sailing Association (SAISA) Spring Coed conference championship at the College of Charleston, finishing fourth in the A Division to open the regatta.

As the event progressed, “The team continued to struggle in the unpredictable winds in the next couple of races and was close to dropping back to sixth overall, meaning that we wouldn’t qualify for the National Championships,” said Coach Jon Faudree.

All told, 11 of the conference’s 32 teams qualified for the SAISA Championship. It was a continuing battle for the sailing team during the regatta, and many times it looked as if it would not be victorious. However, thanks to hard work and perseverance, the team wound up with decent numbers going up against College of Charleston, which won the event, and South Florida, Eckerd College, Florida, Clemson, UNCW, New College of Florida, NC State, Georgia Tech and Rollins College.

“Coming up one point short of last year’s fourth-place finish was a slight disappointment,” said Faudree. “But I feel like we are actually sailing better than a year ago, and we are confident that the hard work will pay off at the National Championship.”

Competing in such prestigious events is a reflection of teamwork, discipline, pride and commitment, team members say.

“It shows that I’m a part of something so much bigger than me and has taught me that I can do more than I ever thought I could,” Knighton told The Florida Times-Union for a story last year.

With its home sitting on the beautiful St. Johns River, the Jacksonville University Sailing Team is a rapidly growing, competitive organization. Operating under the Division of Student Life, the JU Sailing Team is made up of both new and experienced sailors and acts as a competitive racing team and as a recreational club. In fall 2012, it became the first collegiate varsity sailing team in Northeast Florida. The team sails for the full academic year, traveling throughout the United States to compete with colleges and universities in weekend regattas. JU is a member of both the national Inter-Collegiate Sailing Association and the South Atlantic Inter-Collegiate Sailing Association.