Home » All Sections » RIVER LIFE: Water is anything but simple 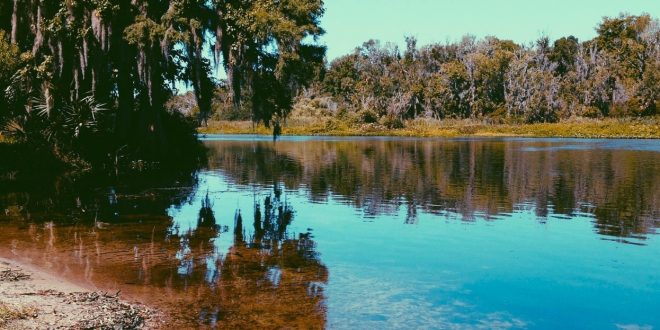 Everything from those charismatic megafauna that everyone loves: sharks, dolphins and manatees; to the huge diversity of freshwater, estuarine and marine species. Some are microscopic, while others can weigh more than 1,000 pounds, with everything in between.

Perhaps the single thing they all have in common is that they live in water. But water is anything but simple.

Water is one of the best solvents that exists in the world, or universe, for that matter. While it won’t dissolve everything, more things dissolve in water than anything else. This ability to dissolve so many things is why the ocean is salty. Eons and eons of the water cycle have dissolved the minerals in the earth’s crust to create the salt in the ocean. Water is constantly being evaporated into a gas in the atmosphere, where the water vapor rises up into the cooler atmosphere, condenses into clouds and returns to earth via rain. Millions and millions of years of rain have given us oceanic sea water that contains 35 parts of salt per 1,000 parts of water. Scientists simple refer to this salinity as parts per thousand or ppt. That means that if we evaporate all the water from 1,000 milliliters of sea water, we are left with 3.5 grams of salt. A milliliter of water is one cubic centimeter which also weighs one gram.

Marine animals are adapted to live in ocean water, while freshwater species cannot tolerate the salt and must live in water with little to no salt. Estuarine species are uniquely adapted to tolerate a mixture of fresh and salt water that we term brackish.

This is due to a process known as osmoregulation. This is the mechanism that plants and animals use to control the amount of water and other ions in their bodies. It is a rather simple concept that has some pretty complex processes at the cellular level. Living organisms, both plants and animals, have a certain concentration of salt in their cells. This concentration can vary depending on where the organism lives.

The basic concept is that life in freshwater must try to retain salt and get rid of excess water, while those in salt water must do the opposite and retain water while ridding themselves of salt. If you look closely at the leaves of salt marsh cord grass you will see little square salt crystals. Plants and animals that live in freshwater will die if exposed to too much salt.

Saltwater fish must excrete salt while trying to keep water, whereas freshwater fish do the opposite since they have an abundance of water but limited salt. But if there is too much salt they die and actually dehydrate because they cannot retain enough water.

A few species can switch mechanisms and move from freshwater to salt and back to fresh: Salmon are a good example. Likewise, eels go from saltwater to fresh and back to salt in their life cycle.

But most plants and animals are adapted to live in a certain salinity. Change the salt content of their environment, they die.

One of the consequences of our dredging the St. Johns River, coupled with what we now know is an unsustainable withdrawal of water from the Floridan aquifer that feeds fresh water into the river, is an increasing salinity in the lower basin. We can see the direct impact in the dead and dying cypress trees along Julington Creek and the almost total destruction of freshwater grass beds in Duval County.

But the impact is even greater in what you cannot see in the river itself.

How hot can water get in the St. Johns River during the summer time?

We routinely see water temperatures into the high 80s to low 90s during the summer months. But small shallow water pockets can reach well over 100 degrees during low tides. That same water can then drop into the low 70s in just minutes during an afternoon thunderstorm.  That makes the resiliency of our estuarine species all that more remarkable.