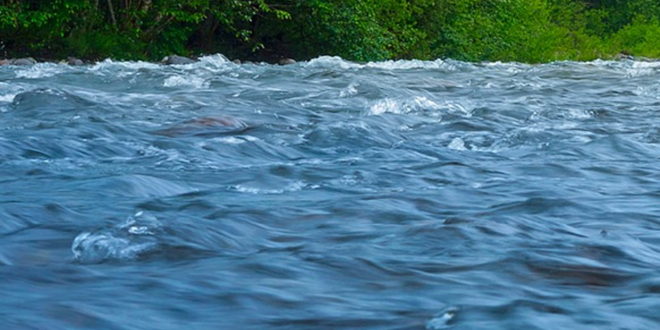 The impact Hurricane Irma had on the St. Johns River continues to amaze me. As a marine scientist, I understand the how and why, but the sheer magnitude is still sinking in. The size of Irma and the amount of water deposited on Florida by the hurricane is, was and shall be simply mind-blowing.

Jacksonville University is fortunate to have a set of instruments installed on our dock that continuously measure temperature and salinity, or salt content. They are a part of the NOAA PORTS project that has a series of 19 stations from Mayport, at the mouth of the St. Johns River, to Racy Point, near Palatka. You can follow the readings at http://www.tidesandcurrents.noaa.gov/ports/index.shtml?port=jx.

Other stations measure currents, wind direction and air gap between the water and our bridges. All good things to know if you are navigating a large ship into or out of our port.

Normally, the salinity at JU is in the middle of the range. Thirty-five parts per thousand (35 ppt) is considered full strength sea water. Zero (0 ppt) means it is fresh water. So we expect to see salinity about 14-18 ppt. When it rains, salinity drops; when we have a drought, salinity increases.

Since Sept. 11 until about early November, the salinity at JU has been consistently at or below 2 ppt. Only recently has the salinity crept up to double digits.

One thing that we have noticed in recent years is the way the salinity rises and falls in response to rain and drought. Under natural conditions with forests and associated riparian wetland vegetation, when it rains, the water drops hit leaves on the trees, or the understory vegetation, and then are slowly absorbed into the ground.

Only after fairly significant rain do we get runoff into the streams and tributaries of the river. Even then, the wetlands slow the flow, filter out sediment and take up nutrients. So a rainfall will very gradually reach the river, and any salinity changes will occur gradually.

The reverse is also true during droughts with only gradually increasing salinity, with some water slowly seeping into the river from the wetlands. The wetlands have served as a sponge to absorb the water while also releasing water during periods of low rainfall.

But in the last several hundred years, we have cut the trees, filled in the wetlands and built on or paved large areas. So rather than slowly releasing the water, it flows off quickly, with dramatic results. The salinity drops rapidly, and when it stops raining, the salinity rises rapidly, too.

That is what has made Irma all that much more impressive. The salinity has stayed down for a prolonged period. The massive amount of water that fell on the state is still being felt two months later.

And make no mistake, while part of the high water can be explained with an appreciation of tides and wind, a large part of the impact has been caused by us as we developed the land for our use. And things will only get worse over time unless we can better manage development in a sustainable manner.

Are we still seeing impacts to aquatic and marine species in the river from Irma?

Yes, recent sampling and even reports by recreational fishermen have shown a dramatic shift, with marine species being pushed toward the mouth and freshwater species extended northward from their normal range. The total number of fish appears to be down, too. I suspect it will be months until conditions return to normal — whatever that is after Irma.