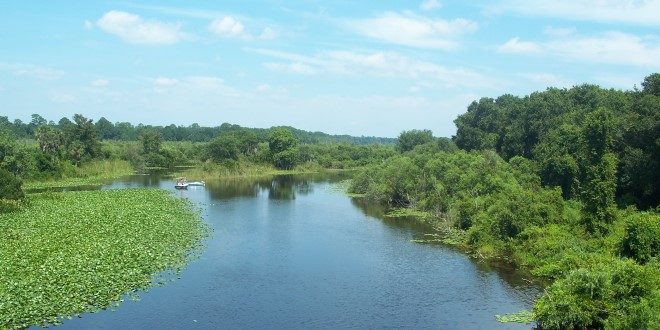 From its beginnings in the freshwater wetlands of south-central Florida, the river flows slowly through a series of lakes, hence its name “River of Lakes,” until it becomes an estuary at its mouth. Estuaries are essential nursery grounds for 90 percent of the commercially important species we like to eat: crabs, shrimp, oysters and many species of fish.

We have discussed before the often-quoted fact that the river flows north. And while other major rivers of the world, such as the Nile and Amazon, also flow north, so do dozens of other rivers. It is not one of only three rivers that flow north in the world, which is a frequently repeated myth about the St. Johns.

However, its flatness is unique when compared to other rivers. Most rivers flow down from higher elevations in the mountains into what is eventually the ocean. But the mountains of Florida are sand ridges with minimal height. Over the course of its 310-mile flow, the St. Johns only falls less than 30 feet. And almost all of that is in the first 200 miles. Some even argue that the St. Johns is not really a river, but a large, flat tidal lagoon. Part of the problem is the definition of a river is not very precise. It is more of a default position that it is a river because we call it a river.

The fresh water that dilutes the ocean water at its mouth all comes from rain. Some of this rain runs off the land into various wetlands and tributaries to eventually reach the St. Johns. Other rainwater makes its way eventually into the Floridian aquifer. Then water from several springs add to the flow of the St. Johns.

It’s the flat nature of the river that intensifies the impact of human activities on the river. So, when we dredge the mouth, or dam a tributary, or withdraw excessive amounts of water from the aquifer, we alter the freshwater input into the St. Johns and impact the estuarine characteristics of its mouth. The river has been remarkably resilient to all the abuse we have caused over the last century. As we reduce the freshwater input into the river, we need to remember that we have an unlimited amount of sea water just to our east.

Now with climate change and its accompanying sea level rise, we must find new ways to cope with, or at least mitigate, the negative impacts we have imposed on our environment. Some are extremely complex and technically difficult, while others are more politics and could easily be accomplished provided there was public support for action.

As we continue to modify the river depth through dredging, we need to look for ways to offset that impact. It is fiction that you can deepen the river and not have any negative environmental effects. Increased salinity and more frequent flooding are only two of a multitude of changes we will see.

So, what can we do to offset this impact? When the ill-conceived Cross Florida Barge Canal project was abandoned, many of the environmental impacts remained. One was the dam on the St. Johns River’s largest tributary. The water behind the dam on the Ocklawaha River covered more than 7,500 acres of forested wetlands with water, flooded over 16 miles of river and its associated uplands, and buried at least 20 springs.

The benefits of a restored Ocklawaha go far beyond Putnam County and extend from the headwaters in Lake County to the estuaries of the St. Johns River. A free-flowing Ocklawaha is essential to the recovery of Silver Springs and is critical to improving water quality in the St. Johns River. That will be accomplished through an increase in water supply by reducing evaporation off the reservoir, allowing blocked springs to flow, and increasing fresh water to the St. Johns River.

The time to free the Ocklawaha is now.

How many years of education does it take to become a marine scientist?

Many then go on to pursue a master’s degree, which may take an additional two to three years to complete. Some go on to earn a Ph.D., or doctorate, that can take four or up to six years more. At each level the scientist becomes more specialized. However, that is just the beginning. We spend our entire career pursuing lifelong learning through research, reading, talking and listening to other scientists present their discoveries. Your education should never stop.