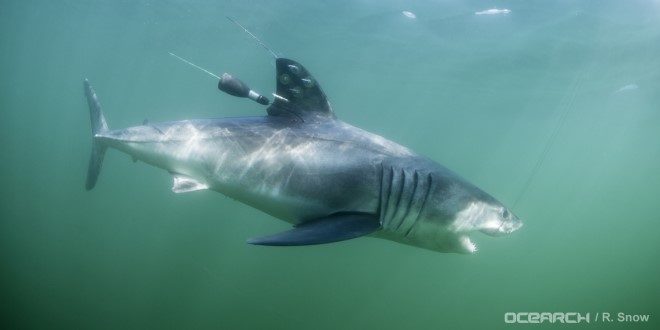 Are there sharks in the St. Johns River? This is a frequently asked question, especially by middle school-aged students or people interested in sharks in general. And the short answer is yes, but as usual, it is more complicated than a simple yes or no.

Sharks are one of the charismatic megafaunas, along with dolphins, manatees and whales, that fascinate people of all ages. These large, somewhat mysterious creatures are difficult to study.

There is much we do not know or understand despite years of study. Sharks are typically confined to marine environments and their ability to live in fresh or brackish water is very limited. In fact, for most species it is almost impossible and can lead to death. This is in large part due to their bodies not being equipped to osmoregulate effectively.

Osmosis, as you may remember from biology class, is the ability of cells and their membranes to equalize concentrations of molecules, especially sugars and salt, by having water (a solvent) pass through the cell’s semipermeable membrane from a less concentrated into a more concentrated one, thus equalizing the concentrations on each side of the membrane. Some cells, like those in kidneys or gills, can transport salt molecules against the gradient, called active transport. That requires energy just like pushing something uphill requires energy.

When an organism does not have the ability to use active transport to osmoregulate, a normal saltwater animal’s cells will take in water, swell and ultimately lead to the death of the organism. The reverse is also true: A freshwater plant or animal, when placed in salt water, will shrivel and die, too.

Animals who cannot withstand any changes in salinity are termed “stenohaline” where “steno” means narrow and “haline” means containing salt. While organisms that are effective osmoregulators can withstand broad salinities, we term them euryhaline with “eury” meaning broad or wide.

Salmon are a great example of a fish that lives in the ocean but migrates to freshwater to reproduce. Eels are the reverse, living in rivers and streams then migrating to the sea to reproduce.

Sharks are largely stenohaline and need oceanic salinities to survive. Only a few species have evolved to survive in freshwater, while a few might swim into an estuary to give birth or pup or possibly to rid themselves of parasites. Only the bull shark typically found offshore of Jacksonville can migrate into the local river and swim any distance upstream for very long.

Recently a small bull shark was caught near Mandarin. There have been periodic reports of other sharks, usually bulls, being captured in the St. Johns River.

Why are we having so many more tropical storms this year?

Weather patterns are very complex, and we are still trying to understand the “why” and to learn how to forecast what will happen in the near future. It’s very challenging.

The recent increase in activity is probably linked, partially, to higher ocean surface

temperatures in North Atlantic hurricane waters. We had a mild winter. The relationship between climate change and the number and strength of hurricanes (or tropical cyclones) is still imprecise. It is the subject of continued research and debate.