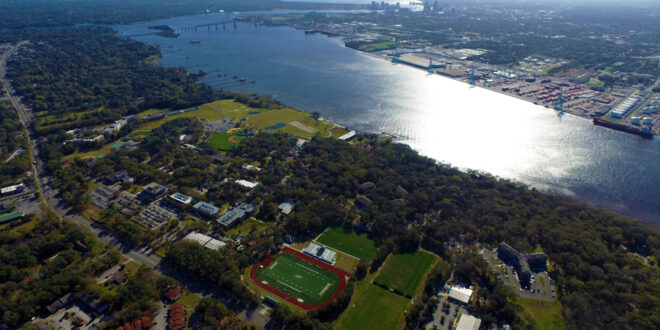 Fishing is one of the many things people enjoy about the St. Johns River. And because it is an estuary, a place where the river meets the sea, there is an amazing array of both freshwater and marine species to catch and enjoy. My grandson and I were fishing recently, and much to his delight and my relief, we caught a catfish and croaker on the first two casts.

The Florida Fish and Wildlife Commission have documented over 200 species of fish and macroinvertebrates, like shrimp and crabs, in the lower St. Johns River basin between Mayport and Palatka.

And while you might think the largest number of fish sampled might be a popular species, like spot or croaker, it is actually the small bay anchovy. Anchovies, yes, a relative of the anchovies you get on a pizza, are among the most abundant species in the St. Johns River. In the river, the anchovies play a critical role as forage prey for larger species. The FWC also collects a lot of juvenile spot and croaker, as well as white shrimp.

The number of fish you find in any ecosystem is inversely proportional to their size. The larger the fish, the relatively fewer individuals there will be. Likewise, the smaller the fish, the more numerous they are. We can collectively call the abundance of small fish “baitfish,” a name derived from their function as fishing bait.

They also serve as an essential component of the food web between the very small phytoplankton and zooplankton, and the larger fish we try to catch for sport or food. Some of the baitfish we find in the river are the previously mentioned anchovy, killifish, menhaden, silversides, plus the juveniles of species like croaker, spot and mullet.

When we look at the other fish commonly found in the river, we find species like the red drum. You may also know this fish by one of its other names: puppy drum, channel bass, spot tailed bass, red bass or redfish. Because names differ by size and geography, it can get confusing, depending on where you grew up and the size of the fish when you caught it.

And it doesn’t stop there. Among the local trout are the yellow mouth trout, or weakfish, which is also called sand trout or gray trout, and to add to the confusion, there is the spotted sea trout. As you travel around the country, you will find the same name for different fish or different names for the same fish.

Other fish found in the river include largemouth bass, which is a popular game fish, along with the plentiful catfish, of which we have two species, the channel and the white. Into the assembly of fish in the river we find stripped mullet, southern flounder and sheepshead.

There are also 55 species of crabs and shrimp that live in the river. The St. Johns is home to three kinds of edible shrimp: brown, white and pink, with white being the most common, followed by brown. Blue crabs are the most commercially important crab in the river.

All in all, the St. Johns has an amazing assortment of both freshwater and marine species to catch and enjoy.

Glad you asked River Life
Where can I find good information about the St. Johns River?
An excellent source of information about the river is found in the State of the River Report for the Lower St. Johns River Basin, https://sjrr.domains.unf.edu/. This extensive document is compiled annually by a team of scientists from several colleges and universities led by my colleague at Jacksonville University, Gerard Pinto, and Radha Pyati, formerly of the University of North Florida and now West Chester University of Pennsylvania. The report contains an extensive amount of data and discussion about the status of the river.