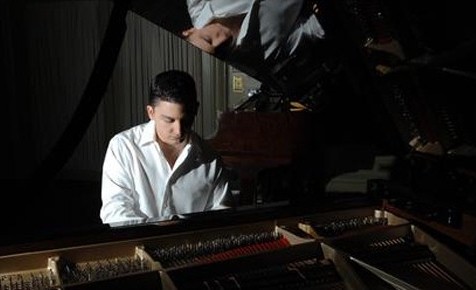 World-class jazz pianist and composer Martin Bejerano brings his award-winning trio in concert to Terry Concert Hall at Jacksonville University Thursday, Feb. 26, including an open Q&A/rehearsal and public masterclass leading up to the performance.

Called a “hot young pianist” by Jazz Times, with a “full and fluent style” noted by the New York Times, Bejerano is considered a major ascending talent. He has toured and recorded with names such as Roy Haines and Russell Malone, and has released two CDs to critical praise, “Evolution/Revolution” and “Potential Energy.”

Bejerano, a native of Miami, has been active as a professional musician since age 15, when he began his performance career playing George Gershwin’s “Rhapsody in Blue” concerto with the Mexican-American Bi-National Symphony while still in high school. A graduate of the New World School of the Arts, he received a full scholarship to attend Florida State University, where he studied classical and jazz piano and composition. He received a master’s degree from the University of Miami. Currently he is a jazz piano professor at the Frost School of Music at the University of Miami.

Having performed with the likes of the Christian McBride Band, Dave Holland, Pat Metheney, Arturo Sandoval and the legendary Chick Corea, he’s played at most major jazz festivals, including Newport, Montreal, Playboy, Copenhagen, New Orleans and Chicago. Bejerano has been featured at Lincoln Center, Tribeca Theatre, The Kennedy Center and Queen Elizabeth Hall in London, and played clubs such as New York’s Village Vanguard, Blue Note and Birdland.

“He’s really reached a level of untouchable and uncompromised ability and creativity,” said John Ricci, JU Director of Jazz Studies. “We are excited for him to stop in to grace us with his teaching and talent.”