Home » Topics » Academics » Restore the Ocklawaha and Return Its Flow Back to the St. Johns River 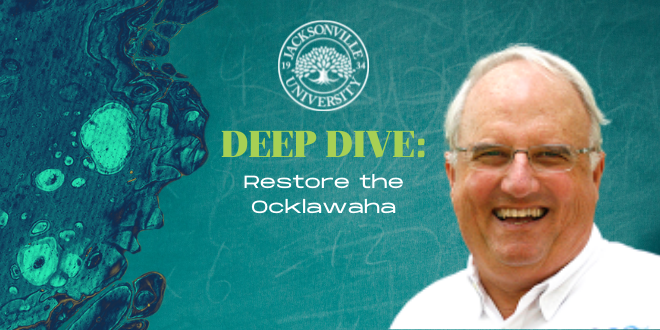 Restore the Ocklawaha and Return Its Flow Back to the St. Johns River

The Ocklawaha River is the largest tributary in the St. Johns River. As is true for much of the St. Johns River system, it is a complex series of lakes and streams that flow together to become the “River of Lakes.” For instance, the discharge from Silver Springs enters the Silver River, which in turn feeds into the Ocklawaha. Now, the Ocklawaha is part of the ill-fated Cross Florida Barge Canal.

According to some historians, the idea of digging a canal across Florida goes back to the 1500’s. The idea gained momentum during the Depression as an economic recovery program with a national defense twist. The canal would save time and keep ships and barges safe from storms and possible enemy attacks.

It is interesting if you go back and look at some of the newspaper stories in the 1940s and ’50s about construction of the canal and the associated dams, locks and resulting water bodies. The area was popular as a fishing destination long before the canal. The area around the Palatka region of the St. Johns River and the Ocklawaha River was called the “Bass Capital of the World.”

Opposition to the canal construction argued that it would ruin the water quality, ruin the fishing, and ruin the local economy. Several family-owned fishing camps along the Ocklawaha were displaced when the dam was built. Originally the earthen dam was called the Rodman, after the nearby plantation, but the name was eventually changed to the George Kirkpatrick Dam to honor a strong political supporter who wanted to retain the dam. It is still commonly referred to as “the Rodman.”

The first construction occurred in the 1930s. Then in 1964, the U.S. Army Corps of Engineers began work to create the Cross Florida Barge Canal. What can be seen in pictures of the process was, to put it bluntly, ugly, at best. They effectively bulldozed thousands of acres of trees, burned some and left the rest to be covered by water. Remnants of the trees can still be seen today when the lake is drained for maintenance.

The continued construction of the Cross Florida Barge Canal drew strong opposition from environmental groups. In January 1971, President Richard Nixon signed an executive order stopping the Barge Canal. At that time, it was one-third complete with approximately $74 million having been spent on land acquisition and construction.

This artificial body of water became a popular fishing attraction and has generated much support to keep the dam and its artificial reservoir. It’s interesting to note that the same arguments to not construct the dam and barge canal, are now used to support it remaining. Opposition to the dam removal argued that it would ruin the water quality, ruin the fishing, and ruin the local economy. Nevertheless, ample science demonstrates that a free-flowing Ocklawaha will provide a significant ecological lift for Silver Springs, the Ocklawaha and the St. Johns River while expanding economic opportunities.

When the dam was built, it destroyed approximately 7,500 acres of valuable forested floodplains and the associated wetlands. It also impacted about 8,000 acres of wetlands downstream of the dam as it flows into St. Johns River.

In addition, the artificial pond covered most of the 20 natural springs, reducing their flow into the river. The overall flow of the Ocklawaha has also been reduced by an estimated 40 percent, due mostly to water loss from evaporation and the suppression of the springs.

When the dam was built in the 1960s, similar construction projects occurred around the world. Creating large bodies of water was considered a good idea at the time. Engineering and construction techniques were thought to be cost effective and economically positive. Now, after more than 70 years, the cost to repair and maintain these structures is being reexamined. Some are failing with catastrophic results.

The time has come to restore the Ocklawaha and return its flow back to the St. Johns River. Such an action will benefit both the ecology and economy of the entire region from Ocala to Welaka to Palatka to Jacksonville. It will re-establish tributary flows to the Ocklawaha from the vast network of creeks and rivers. It will enhance the entire food web in Silver, Ocklawaha, and Lower St. Johns River by offsetting the accumulating impacts of dredging, paving and wetland destruction by development throughout the system.

It’s the right thing to do both ecologically and economically.

How can I express my opinion on restoration of the Ocklawaha River to decision makers?

The St. Johns River Water Management District is seeking input until October 22 from the entire community and various stakeholders regarding the Kirkpatrick Dam and Rodman Reservoir. The questions are focused on the dam’s environmental and economic impact. You can access the survey at: https://floridaswater.formstack.com/forms/rodman