Home » All Sections » Ready to live on Mars? Colonization is topic of interdisciplinary panel March 9 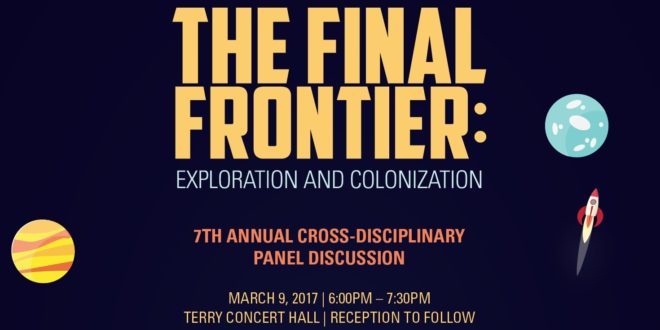 Ready to live on Mars? Colonization is topic of interdisciplinary panel March 9

Just as faculty members in the College of Arts and Sciences were debating topics last fall for their upcoming interdisciplinary panel discussion, billionaire SpaceX founder Elon Musk was taking the stage at the 67th International Astronautical Congress in Guadalajara, Mexico, to reveal his plans for colonizing Mars.

In an instant, they had their theme: “The Final Frontier: Exploration and Colonization.” The 7th annual event is from 6 to 7:30 p.m. Thursday, March 9, in Terry Concert Hall, and is free to the public.

“The idea of exploration and colonization was immediately seized upon by pretty much everyone in the room,” said Associate Provost Dr. Lee Ann Clements, Dean of the College of Arts and Sciences. “The initial ideas were centered on space exploration and potential colonization, but we quickly began discussing biological, historical, social, political and technical issues as well.”

Speakers and their topics are:

The idea of colonization is complex, with many moving parts and potential outcomes, so the discussion should be very eye-opening, Clements said.

“For example, exotic and invasive species change the ecology, but spread of species is part of their success. Is this always for the better?” she said. “Star Trek and the ‘Prime Directive’ of not influencing the societies of native peoples is part of the discussion, especially since it is impossible to observe a culture without influencing it … and by the way, the crew of the Enterprise was never successful at sticking with the Prime Directive.”

Watch the SpaceX video below:

In addition to the discussion, other activities are associated with the event:

Star Trek has often functioned as an allegory for our cultural moment, and offers an ultimately hopeful vision of the future where we can find peaceful ways to exist in an incredibly diverse galaxy. In this talk I explore the Star Trek: The Next Generation Season 5 episode, “Darmok,” and its relation to Transformational Conflict Resolution; when we encounter an Other whose very language is incomprehensible to us, how do we communicate? This episode exemplifies the connections between conflict resolution and storytelling, and like the vision of the Star Trek universe itself offers us hope for the future.

Native inhabitants lost ground when the English colonized eastern North America in the 1600s. This was true not only for peoples, but grasses as well. Old World bluegrasses and white clovers took possession of the land from New World grasses. Why were the colonizers at ground level so successful? This discussion from American history introduces the issue of colonization’s ecological aspects.

What might the discovery of intelligent life on another planet reveal about us as human beings on earth?

Space technology has been rapidly developing since the mid-20th century; however, we still need further advancements to be able to colonize our solar system. Long and expensive travels, harsh space/planet environments and creating self-sufficient colonies are some of the major challenges we are faced with. Many scientists and engineers have been working on providing safe, reliable and economical solutions to make this dream come true. There are technological challenges in space colonization and new developments in the field.