Home » All Sections » Our Place in the Sun: JU Outshines the Rest – Dr. Jeremy Stalker Associate Professor of Marine Science 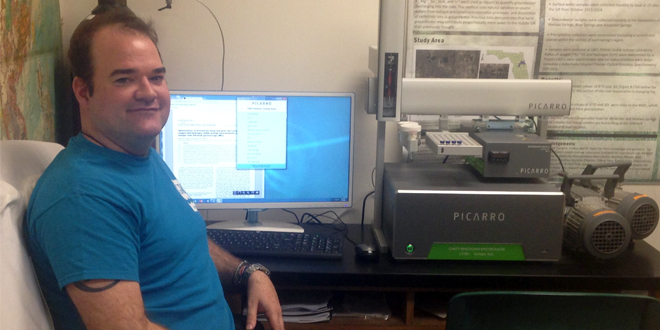 Associate Professor of Marine Science and native of East Lansing, Michigan, Jeremy Stalker earned his doctoral degree in Geological Sciences with a concentration in Geochemistry from Florida International University in 2008. Three years later, he arrived at Jacksonville University, and in the seven years since, has assisted several students in unique research projects, including The Turtle Project in 2016 with graduate student Kaitlyn Dietz. Springing from a university-wide emphasis on experiential learning and student research, Dietz is one of many JU students who have taken a deep dive into real-world research. She looked at chemical signatures within sea turtle eggs to determine their migration patterns using isotopes. Dr. Stalker says, “These turtles are recording the oceans where they live in their tissues, taking the chemical signatures of the ocean and incorporating it into their bones and shells.” What Dietz and Stalker were able to determine from this study was that turtles arriving on both Ponte Vedra and Jacksonville Beaches came south from North Carolina and Bermuda, and north from the Bahamas and Cuba.

Along with assisting in student research, Stalker has also been involved with JU’s Marine Science Summer Camp, a series of week-long sessions that run the last two weeks of June for students between the ages of 14 and 18 interested in studying marine science. As Stalker puts it, “we run experiments, and we build field apparatuses, and it’s fun seeing the next generation of science-interested kids.” Some of the students that previously participated in camp later became JU students, like Olivia North-Menthonnex, a rising senior majoring in marine science, with a minor in psychology. For Stalker, the real joy in teaching is seeing his students understand science. “I like it when that lightbulb comes on and that epiphany happens. You can see everything they learned in class come together. Those moments are really fun.”