Home » All Sections » Our Place in the Sun: JU Outshines the Rest – Carlos Adorno Class of 2020 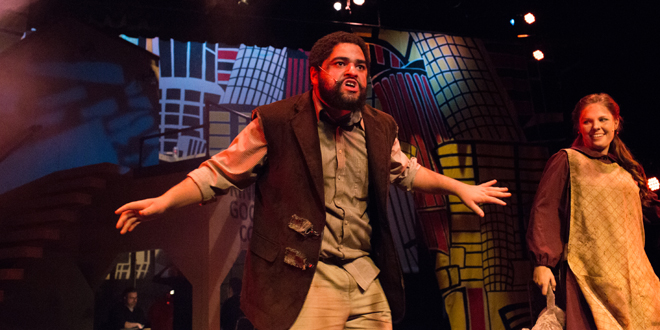 Our Place in the Sun: JU Outshines the Rest – Carlos Adorno Class of 2020

Carlos Adorno, a rising junior and theater studies major from Orlando, Florida, is the first student in Jacksonville University’s 84-year history to have a production considered for performance by the University’s theater department. As his mentor, Professor Erik DeCicco, says,

“I cannot find anything in the history of JU where a student has written a full play, and the theater department has produced it.” The play, String, which Adorno hopes to have produced during his junior year, was inspired by his own life and growing up in Orlando. He says, “My show was heavily influenced by my childhood community.” But the show is about more than simply capturing the life he once had, says Adorno. Having listened to Lin-Manuel Miranda’s highly acclaimed Broadway show Hamilton, he found the inspiration to put his thoughts to paper. Like Lin-Manuel, Adorno is also of Puerto Rican descent, and seeing a fellow Puerto Rican succeed in theater helped Adorno realize his own potential. “Is there a place for young Puerto Rican guys in theater?” he asks, and is confident that the answer is a resounding yes. “It was the push I need to say, yeah, I need to start that. Let it begin right here,” he says. In working with DeCicco, both as a student and mentee, Adorno has made an impression, says DeCicco.

DeCicco describes Adorno as passionate and driven, always bringing with him enthusiastic energy. “He inspires me to be a better person, just by asking questions, being hungry for the work, and showing up to class with a smile on his face.” For the future, Adorno hopes to work in film and television, writing and acting. “I’ve been working to learn a great deal about the movie and TV industry, and I’m willing to invest a good chunk of time into both.” The key to his success, he says, is passion. “Be relentless with the art. So far, that has worked for me very well.”