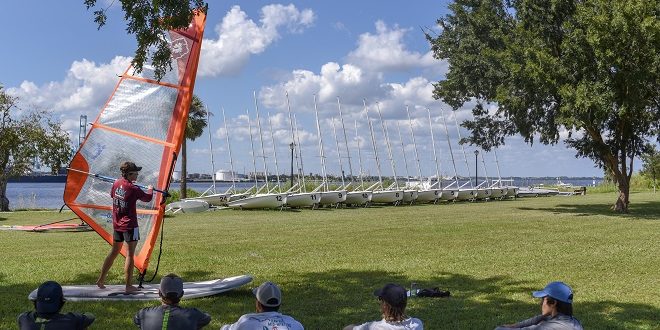 She says, “The story behind me coming to the University is interesting. Dr. Steven Davis, who is very enthusiastic about building a windsurfing and watersports program on the JU waterfront, contacted me out of the blue. He asked if I’d like to be on the advisory board for the program and of course, I accepted.” That led to her first visit last February and again this fall for a windfoil clinic and windsurfing tutorial on the St. Johns River and JU waterfront.

Placing in the top 20 in Windsurfing RSX during the 2012 Olympic Games, Hall’s other career highlights include placing second at the 2012 U.S. Sailing Rolex Miami OCR and taking the bronze at the 2011 Pan American Games. Her current objective is qualifying for the 2020 Games.

“Farrah Hall is energetic, articulate, thoughtful, and committed. While she’s training for the 2020 Games, she wants to help us reach our potential on the water,” Jacksonville University President Tim Cost said in addition to expressing his gratefulness for her involvement here.

Head Sailing Coach and Waterfront Director Jon Faudree said, “I’m thrilled that Farrah was here as this ties into the bigger picture of what we’re trying to build here with the development of the waterfront and transforming this University into a water-focused, healthy campus.” But he gave all the credit of organizing Hall’s participation with students to Davis and Victoria Clark, a Junior at JU and a member of the Sailing Team.

Hall has a lot to say when it comes to young women, like her, pursuing the challenge of sailing professionally or competitively. “It’s tougher for women because many of us grow up with the belief that we’re inferior. Not necessarily inferior to men, but in general. We’re too hard on ourselves and we try so hard to avoid being what media, culture, stereotypes, and celebrity culture depict that we end up not knowing how to be.”

Over her career, she has met many women who developed a great capacity for life through sport. “I know hundreds of women who are true warriors. They compete at regattas, can trailer a vanload of people, equipment, and boats up and down European mountains, can launch, drive and dock a boat alone, can fix a powerboat engine, complete their own sail repairs, and then discuss their winning tactics over a beer. I know women who are mentors and coaches who guide their teams to personal victories. We’re so much tougher than we know, so why is it sometimes hard to believe in ourselves?”

“We’re so much tougher than we know, so why is it sometimes hard to believe in ourselves?”

According to Hall, the sport is just one way to challenge and discover self. She believes that the sport teaches student-athletes to persevere and hold fast to their core values.

After spending a weekend in Jacksonville working with a mix of students and locals, Hall told President Cost, “You have some dedicated folks working to realize an immense vision, and I could not appreciate that more. I truly believe you have the persistence and insight necessary to create the best sailing program in the US, and I’m thrilled to have something to give to this ambitious plan.”

And if anyone understands ambition, it’s Hall. A 2003 graduate of St. Mary’s College of Maryland, she holds a bachelor’s degree in biology and worked for the State of Florida for two years conducting seagrass research. She’s the daughter of Linda Hall who won multiple World Rowing Masters Regattas. Also a past collegiate swimmer and triathlete, Hall still found time to play the violin, be an avid reader, and bird watch.

Her advice to undergraduates begins with choosing the right school. “I got lucky in that I chose a small college so I could get involved both on campus and in the local community.” She even started a windsurfing club there. “Get to know your teachers, and seek out different ways to experience university life through sports, extracurricular activities, clubs, or volunteer work.”

After facing many of her own challenges, including some defining and difficult moments following the 2008 Olympic Trials, Hall isn’t shy about being upfront with student-athletes. She says that, when it comes to tough decision making, personal values become your cornerstone. 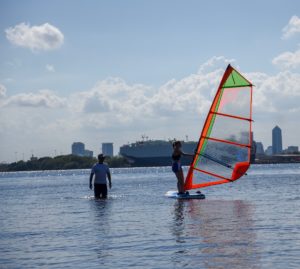 “Strong values are what you must rely on when making life’s most important decisions. Those values shape you through each experience, including lessons learned from sports. When you ask, “How do I get through this” or simply, “What the hell just happened to me,” values are what you fall back on when you don’t know, intellectually, the answer in a difficult situation. Practicing these values every day, especially at school, gives the knowledge and strength you’ll need for life’s inevitable challenges.”

Hall travels to Miami in January for the Miami World Cup, which is a qualifier for the Pan American Games. In the meantime, she trains. But she also expresses her thanks to President Cost, Dr. Davis, Coach Faudree, and to Victoria and other students for their efforts and says, “I hope to see each of you and the team again very soon.”