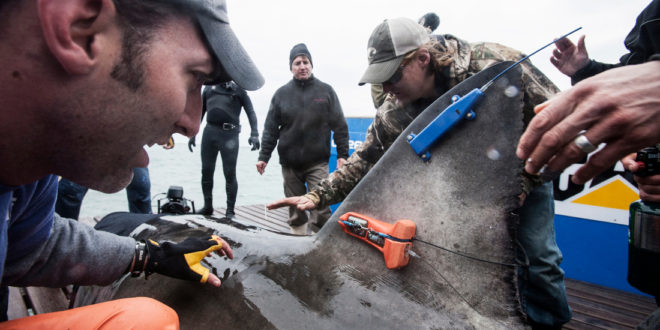 The world-renowned shark-research ship M/V OCEARCH is docked in downtown Jacksonville this week, readying for a return to open waters Thursday, Jan. 18, to study mature great white sharks as they winter off the Southeast coast.

On board the flagship vessel of OCEARCH at Jacksonville University will be JU shark researcher Dr. Bryan Franks as lead expedition scientist, guiding the team as it gathers more clues on habitat use of the Lowcountry White Shark vs. the Cape Cod White Shark. Another 11 scientists from institutions across the country will collect data for their own separate studies.

“More movement data, especially on mature animals, remains the key to a comprehensive understanding of the species’ habitat use,” Franks, Assistant Professor of Marine Science at Jacksonville University, said of the upcoming expedition’s chief goal. “More data will allow researchers to better understand seasonal ranges and identify critical areas for the white shark along the eastern seaboard.”

OCEARCH at Jacksonville University, a high-profile collaboration announced last year, puts the University and its namesake city on the world stage for marine science learning. It also provides one of the global leaders in ocean species research a premier academic home with resources to expand for years to come.

The outfit has already produced critical scientific data related to the tracking of keystone marine species, and is returning to the Lowcountry — the South Carolina coast — plus the coastal waters of Northeast Florida and Georgia after tagging two white and two tiger sharks in the area last year.

“We’re returning to the Lowcountry because our sharks led us here,” said Chris Fischer, OCEARCH founding chairman and Expedition Leader.

“Two of our mature animals, Lydia and Hilton, tagged in the Southeast spent significant time in Canadian Atlantic waters, while most of our Cape Cod sharks have not, with some exceptions,” said Dr. Bob Hueter, Director of the Center for Shark Research at Mote Marine Laboratory and OCEARCH’s Chief Science Advisor. “Because of the overwintering importance of the Southeast for the entire Northwest Atlantic population, and because our mature animals tagged there went to Canada, it’s important we follow up on previous expeditions and try to get more tags out in the Southeast, especially on mature animals.”

OCEARCH at Jacksonville University tagged Hilton, its first mature male who is currently pinging off the coast of Jacksonville, in the area last year. In total, the research group has caught, satellite-tagged and tracked 33 great white sharks in the Atlantic since 2012, including five mature white sharks. However, scientists need a larger sample size.

The team of shark researchers and fishermen will begin their research off the coast of Jacksonville before heading to Hilton Head, S.C., as part of Expedition Lowcountry II.

OCEARCH at Jacksonville University will host researchers from 11 various institutions aboard the M/V OCEARCH as part of its mission to enable data collection by providing collaborating researchers and institutions unprecedented access to mature marine animals.

Another 11 researchers from 10 institutions will receive the biological samples from each animal tagged, allowing them to analyze the results from the blood, mucus, muscle, parasite, genetic, and other samples collected. Researchers will use these samples to conduct several studies, including understanding the sharks’ reproductive condition.

All sharks will be fitted with at least one satellite transmitter tag and an acoustic tag. As the sharks’ fins break the surface, the satellite tag will transmit their locations.​​

OCEARCH at Jacksonville University, an internationally recognized at-sea laboratory with millions of social media followers and dedicated to studying keystone marine species like great white and tiger sharks, is expected to magnify opportunities for students of JU marine sciences and other programs. It is the largest shark collaborative in the world.