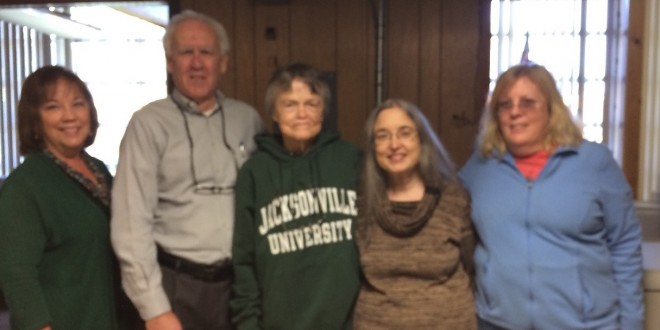 Peggy Rickey, third from left, accepting another JU Employee of the Month award in December 2015.

She was known for being “hard as nails on the outside,” but with a heart of gold on the inside. A wallflower, yet a tenacious employee who loved working for Jacksonville University, well beyond normal retirement age. A bit brazen, but always a caring perfectionist, to the tune of even lining up each and every paperclip on her desk.

And fast. So darn fast. Faster than other workers half – even a quarter – her age.

JU is mourning the passing of longtime imaging technician Peggy Rickey, who died Monday morning, April 12, after a battle with cancer. She was 75.

“We’ve lost a dedicated employee, faithful … all those superlatives. An overall good person who loved this University,” said Mike Bobbin, Executive Director of Campus Services, who hired Ms. Rickey in January 1997 and was her sole supervisor during her 19-year employment. “She made my and so many others’ lives easy. When she was in, I didn’t have to check on her. Everything was in good hands.”

“Bad Peggy,” as some affectionately took to calling her because of her often sassy approach and demeanor, nonetheless earned Employee of the Month honors many times over, the last this past December, just a month before she had to stop working because of her illness.

“Peggy Rickey is amazing,” wrote office associate Judith San Socie and Physics instructor Terry Ellis in their nomination. “She is never too busy to help. Peggy is always so friendly and helpful, and always gets the job done perfectly and earlier than requested.”

She could be counted on to quickly turn around printing and copying projects handed to the Duplicating Department, all from her spotless domain at Founders 11, the floor of which she routinely came in on weekends to scrub on her hands and knees.

Ms. Rickey had a passion for precision, which may explain why she gladly took to the sidelines for years as a statistician for numerous Athletics sporting events.

But it was “the shop” where she reigned supreme. Whether creating three-ring binder course packbooks for professors teaching science or nursing classes, fliers for students in the Davis College of Business, programs for Commencement or brochures for College of Fine Arts concerts, she could finesse and finagle her two color printers and one black-and-white to create whatever was needed – in stellar fashion and in record time.

“I can’t tell you how many times someone would leave a job, and by the time they got back to their office, she’d call and say, ‘It’s done.’ She didn’t waste time,” Bobbin said.

“She had an incredible work ethic and would accommodate anybody’s last-minute request,” she said. “They broke the mold with Peggy.”