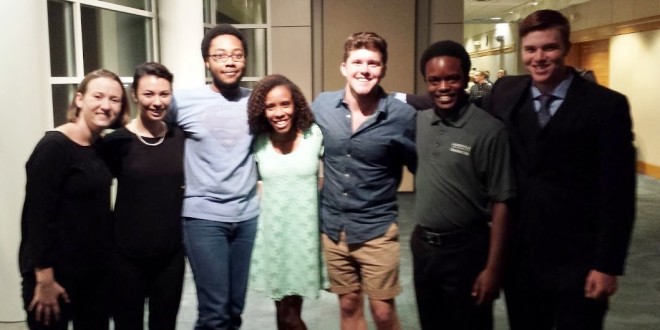 The fifth annual music camp, which was held in early July at the College of Coastal Georgia, brought together student musicians age 10-18 including a symphonic orchestra and a primary strings program.

Dr. Shannon Lockwood, JU adjunct professor of cello, served as the JU contingent’s supervisor and taught cello at the camp. She said the six from JU, who were chosen for their positions based on their teaching and performance experience, guided students through their daily practicing, taught lessons to primary students, led evening activities, and helped develop strong bonds among students, interns and faculty.

“They did an incredible job working with the students, mentoring, and assisting with camp activities,” Lockwood said, “in five years it’s never run smoother and their presence was a major influence. The youth orhestra looks forward to building a relationship with JU for future activities.”

The Golden Isles Youth Orchestra, formerly called the Coastal Youth Symphony, was founded in 2005 by the Coastal Symphony of Georgia to introduce classical music to the children of Glynn County and the surrounding area.  In 2014, GIYO outgrew its affiliation with the Coastal Symphony of Georgia and became a separate entity. The orchestra currently includes 55 student musicians who are committed to weekly rehearsals of two and a half hours, to lessons and to daily practice in preparation for concerts in December and May. GIYO is proud of the diversity in age, gender, racial and economic status that exists among the participants at all levels.