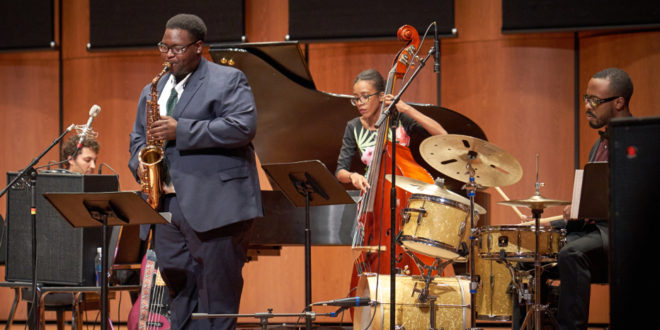 Saxophonist DeAndre Lettsome is on his way to blowing right by his teacher, and Director of Jazz Studies John Ricci couldn’t be more thrilled.

Lettsome starts one of the world’s most venerated residencies for emerging jazz artists on Monday. The 22-year-old music performance senior is one of only 23 young musicians from across the world selected by the Kennedy Center for the Performing Arts to take part in Betty Carter’s Jazz Ahead, a career development program hailed for “discovering and presenting the next generation of jazz greats.” “I’m incredibly thrilled for this great opportunity in an international residency, and it’s going to be a blast to pick their brains to see what they use to portray their music,” said Lettsome. “I’ve always had some doubts about my playing and composing, and over the past few years I’d auditioned for or taken part in competitions that didn’t turn out the way I wanted. I’d gotten discouraged a little bit.”

That’s where Ricci came in.

He insisted Lettsome submit a recording of himself performing a couple of his pieces to the Jazz Ahead residency. Having worked one-on-one with Lettsome helping him cultivate his abilities, Ricci had unfurled techniques for jazz composition based on his own previous works to aid Lettsome in fleshing out his own pieces.

“He has since far surpassed my expectations and has created his own personal style that connects complexity with melodic beauty consistent of top jazz artists today,” an elated Ricci said. “This also goes for his abilities as a jazz improviser. He’s blown past and above his own teacher, which is what any self-respecting performing arts instructor would hope for his or her students.”

“We are very proud of DeAndre’s accomplishments and being accepted into this program at one of the premier institutions for the arts in the U.S.,” said College of Fine Arts Dean Dr. Henry Rinne. “It is truly a launching pad for a career in jazz, and the list of alumni who have gone through the program is astounding.”

Lettsome, who grew up on Jacksonville’s Northside, became spellbound with music in elementary school, when at age 8 he was walking out of the cafeteria and got handed a flyer for a summer band program. He asked his mom if he could go, she got him a saxophone, and he was hooked.

After graduating from Jacksonville’s Douglas Anderson School of the Arts and being accepted to JU, Lettsome landed in a music enrichment project begun by Ricci, in which students were charged with transcribing a modern jazz song and bringing it in for the group to play. Sophomore year, he decided it was time to write his own song, and he spent two years polishing and fine-tuning it.

“I’m very particular and didn’t want to put out anything that didn’t sound good. I want something to evoke an emotional response, and the exercise drove me to look into things to improve my writing, using different concepts and putting effective melodies over harmonies.”

The result was the ballad “Black Rose,” written for his fiancé, Amber Rose. The two met in sixth grade in band and have been a pair since 2012, after mutual friends told Lettsome that Rose wanted to go to prom with him. She’s also a senior at JU, majoring in biology, and will graduate along with Lettsome this spring.

Lettsome enthusiastically praised Ricci for his guidance and influence in helping understand technique, approach and distinctiveness in composition. Showing someone how to perform and compose isn’t enough, Lettsome insisted; allowing someone to be their own performer and composer takes a selfless and empathetic mentor.

“He’s an amazing sax player, composer and arranger … we dove heavily into different approaches to harmonic and melodic concept and understanding other artists’ ideas,” Lettsome said. “But he didn’t try to change me as a musician. He gave me stuff he was doing and what modern players were doing, but he didn’t mold me into a protégé. He helped add on to and increase what I was doing. He allowed me to formulate my own sound and fueled me to work hard and become the player I am today.”

Reflecting on his newfound success, Lettsome said he wanted to thank the Music Division faculty, including Dr. Rinne, Ricci and Associate Professor of Music Timothy Snyder, for believing in him.

“I love the music program at JU and how it allows me to play my compositions freely with the ensembles. Having teachers who support you is a great thing, and without that I would definitely not be in the position I am now.”

For more about the Betty Carter Jazz Ahead international residency and to watch the March 29-31 live performances, visit http://www.kennedy-center.org/video/index/M6683.