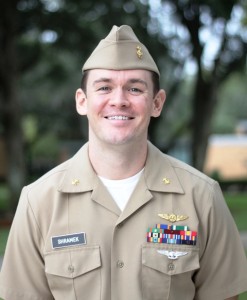 Service: 10 years of service. I joined the Navy in the Delayed Entry Program in 2002, and began my first enlistment 2003 as a Naval Aircrewman Aviation Warfare Systems Operator. After two years of training, my first homeport was Marine Corps Base Kaneohe, Hawaii. During my first four-year tour, I completed multiple deployments and detachments to Southeast Asia, Europe and the Middle East. My second tour brought me to Jacksonville as an instructor for systems on the P-3C Orion aircraft at Patrol Squadron 30, NAS Jacksonville. I then submitted an application for the Seaman-to-Admiral 21 program to become a Naval Aviator. It allows me to maintain nearly all of my active-duty benefits while allowing me to focus on completing my bachelor’s degree and being commissioned as a U.S. Naval Officer.

Tell us about your service experience. In the community of P-3C aircraft, our mission is multi-faceted. Primarily, we train for Anti-Submarine Warfare, but we are capable of many other things, such as anti-surface warfare, intelligence gathering, surveillance, reconnaissance, weapons delivery, and search and rescue.

It is hard for some to believe a fixed-wing aircraft could provide search and rescue capability, but there is one mission that I will never forget. Our crew had provided support in search of a destroyed vessel carrying more than half a dozen passengers in the Pacific theater. Searching a very large area of the ocean and using the aircraft’s advanced sensors, our crew located the vessel, and we were able to assist by deploying survival rafts, supplies and monitoring until surface support arrived for their rescue. Being low enough in altitude to see the exhilaration on their faces and expressions of gratitude as we passed over them made the extensive training we all go through worth it that day.

What are some of your memorable experiences in college? Having dinner with other student veterans and alumni at President Cost’s home. I will never forget that. It is great to meet other vets in classes, and quite often I find out more and more of the students here are veterans.

Any favorite classes? Causes of War and National Security Policy. I switched majors from Business to Political Science when I transferred to JU. The first class I took, Causes of War with Dr. Steven MacIsaac opened up a new side of the bigger picture in world conflict that most people in the military never get to address. This is my last semester, and I am taking National Security Policy to wrap up my undergraduate degree with another interesting outlook on our national defense.

What sets JU apart? JU understands the unique transition for military veterans. For example, other universities were not willing to accept a lot of transfer credits because I had switched schools on a few occasions. One local school even said it would not accept any upper-level transfer credits at all.

What might surprise others about you? My program puts me in a unique position, and others are often surprised to learn the great benefits I receive from both JU and the military. It is hard for some to fathom that I am active duty and going to school full-time, still earning active pay and getting most of the tuition covered by JU and the government.