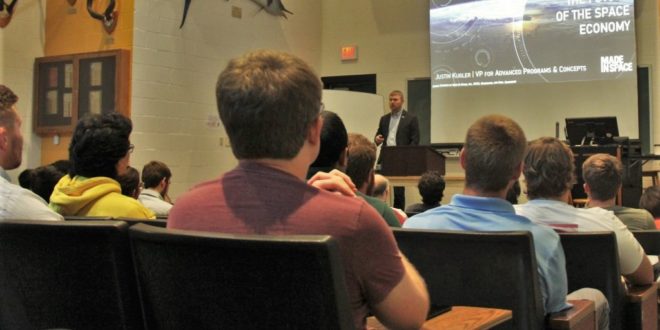 Made In Space manufacturing aims to improve peoples’ lives

A Jacksonville-based technology company executive says his firm’s mission is to put space to work for everyone.

Mr. Kugler said Made in Space, which recently announced the relocation of its headquarters from California to Jacksonville, occupies a unique niche in the space industry. It specializes in developing technology to manufacture products in space.

The 10-year-old, 100-person company already has proven its technology in government and private commercial partnerships. In its partnership with Jacksonville’s Mayo Clinic, for example, Made In Space is working on growing stem cells in space more rapidly, efficiently, and in greater quantities than can be achieved on Earth.

“We take advantage of the environment to develop new materials and products we can’t manufacture on the ground,” Mr. Kugler said.

Made In Space operates in several distinct sectors, Mr. Kugler said. One is manufacturing products in space for use on Earth. A second is manufacturing products in space to be used in space, for example, on long-range missions to Mars. A third is producing satellites that manufacture and assemble themselves, such as the company’s Archinaut, which at 300-kilograms launch weight will be just as powerful and capable as satellites 10 times heavier. Archinaut will launch with the capability to build its own solar panel array to power its systems.

“We’re able to design structures that are optimized for the space environment,” Mr. Kugler said, “and we’re using space itself to build these larger and better optimized platforms.”

Mr. Kugler also painted a picture of future space manufacturing that will allow for long-term space missions, such as the estimated two-and-a-half-year trip to Mars.

“You can’t possibly take everything you need and the backups to keep everybody on the mission alive that long,” Mr. Kugler said. “With on-board manufacturing capability and robotic assembly, you can make what you need when you need it.

“That reduces your storage space capacity and increases your ability to respond to mission needs.”

Mr. Kugler said Made In Space tested the concept by using its capability to solve today the CO2 filter problem encountered by the problem-plagued Apollo 13 space mission in 1970. Then, NASA engineers, ground controllers and astronauts spent more than a day trying to adapt one type of filter to fit into a system designed for a different-sized one. In the end, they developed a solution using duct tape and cardboard that took an hour to explain to the astronauts on Apollo 13. Mr. Kugler said Made In Space used its technology to manufacture an adapter within an hour.

That type of manufacturing capability is transformational, Mr. Kugler said.

“I expect space manufacturing to do for the space industry what the mobile phone did to the communications industry,” Mr. Kugler said. “We’re learning how to put space to work for everyone.”

Mr. Kugler also took the opportunity to continue his discussion with students during a lunch after his formal presentation.

“Kugler opened my perspective to the benefits of space when he introduced the idea of having the ability to bring space into the boundaries of society,” said rising senior biology major/philosophy minor Annalyce Papo-Ramsey. “He related the innovations of space to all areas of study including my own, biology. The mere fact that contributing factors such as zero gravity can be used for stem cell research for transplantations is astounding. This new research is essential to the public, and society should become more knowledgeable of the future”.

The Science & Engineering Lecture Series continues through April 9. The remainder of the lectures include: