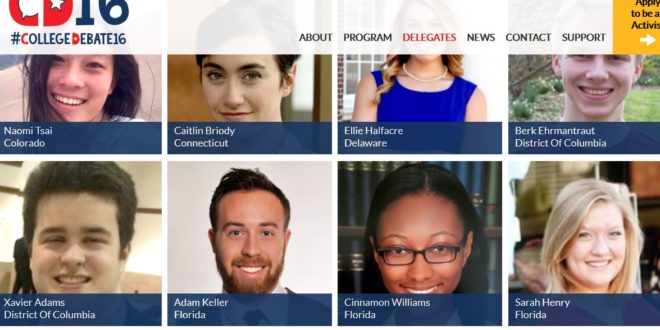 As the moderators pepper Hillary Clinton and Donald Trump with questions this fall in their historic presidential debates, Adam Keller will be watching with much more interest than the casual observer. That’s because the JU Student Alliance President may have had a hand in influencing which questions were asked.

Keller and other students nationwide were hand-picked to take part as College Debate 2016 delegates in a national student-led conversation around the key issues that resonate with Millennial voters. The first-of-its-kind initiative created by Dominican University of California, a Voter Education Partner of the Commission on Presidential Debates, uses technology and social media to generate discussion of issues important to students, and to bring those issues to the attention of the moderators of this fall’s Presidential Debates.

“What do the candidates plan to do to boost our economy and create jobs so we won’t be unemployed?” he says on the event’s website. “And how do they intend to implement their plan? It’s easy to talk, it’s more trusting to hear a plan of action.”

At the convention, Keller and his colleagues were part of a moderated Town Hall streamed live to delegates’ home campuses across the country.

(See the video of the Town Hall below:)

The programming for College Debate 2016 focused on promoting civil discourse, understanding responsible digital citizenry and avoiding stereotypes and assumptions, while focusing on the issues rather than party politics. The delegates caucused, debated and brainstormed, ultimately voting on five topic areas to focus on. They then created and sent a memo to the moderators of the 2016 Presidential Debates with five questions they want the candidates to address: