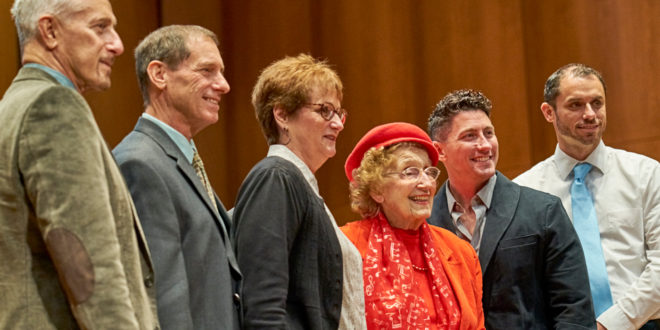 JU Executive Secretary Dolores Starr, left, who was given the "Decades of Dedication" award at the March 2017 Women's History Month celebration, with Dr. Frances Bartlett Kinne.

In celebration of Women’s History Month, Jacksonville University recently named its Student of the Year and Woman of the Year, while also bestowing a special Decades of Dedication Award.

With hundreds in attendance at Terry Concert Hall, President Tim Cost announced junior psychology major McKenzie Bolin as Student of the Year, and Assistant Dean of Students and Director of Student Solutions DaVina Hamilton as Woman of the Year. He also presented Executive Secretary Dolores Starr with the Decades of Dedication Award. The three awards were given at the “100 Years of Leadership & Legacy” event this month that honored JU Chancellor Emerita Dr. Frances Bartlett Kinne for her outstanding contributions as an educational pioneer. Dr. Kinne will be 100 in May and was interviewed on stage by Melissa Ross, the Emmy award-winning host and producer of local public radio station WJCT’s First Coast Connect public affairs show.

Here is more on each of this year’s winners:

Student of the Year

The Student of the Year Award is given annually to a sophomore or junior female student who represents the next generation of leadership. The student must be academically successful, involved in student organizations, a leader on campus and passionate about JU. The recipient receives a $500 scholarship through the Frances Bartlett Kinne Women’s History Month Scholarship Fund.

Bolin received a record seven nominations and was picked from among 26 finalists.

“McKenzie is an outstanding representative of Jacksonville University’s next generation of leaders,” Cost said. “Not only is she an exemplary student, but she also holds leadership positions in several organizations. Her optimism and positive energy combined with her passion for JU and motivation were key factors in her receiving this award.”

Bolin is a Presidential Student Ambassador in Admissions and heavily involved on campus with the Student Government Association, the Alpha Epsilon Phi sorority, Student Alumni Association, Honors, Order of Omega, and PanHellenic activities. She has studied abroad multiple times, including serving as a Peer Mentor on a study abroad trip to Iceland with first-year students.

Woman of the Year

The Woman of the Year Award goes to a faculty or staff member who has exhibited exceptional achievements; serves as leader on campus to students, faculty and staff; and makes significant contributions to JU and the community.

Hamilton has served in many roles in her more than 10-year association with Jacksonville University. She was an undergraduate- and graduate-level student, excelling as a student athlete, where she honed a sense of responsibility, integrity and drive.

She continues to bring these attributes to her role as an employee, rising from Admissions Officer to Assistant Director of a newly established Student Solutions Center, then Director and finally, Assistant Dean of Students. One of DaVina’s colleagues describes her as the “epitome of the JU success story.”

In addition to receiving her Bachelor of Arts in Communication from JU in 2009, she earned her Master of Education in Instructional Leadership & Organizational Development from the University in 2013. She was a member of the Women’s Basketball Team and Student Athlete Advisory Committee, and was a student newspaper feature writer.

“DaVina’s passion for JU is always forefront. She consistently provides leadership and direction to many areas that affect our students’ experience,” Cost noted. “She tirelessly champions programs, resources and individual students, providing meaningful development and leading to the betterment of JU.”

In addition to her contributions on the JU campus, Hamilton was a Daniel Home Volunteer and YMCA Volunteer Basketball Coach, and is actively involved with JASMYN, which supports and empowers LGBTQ young people in the Jacksonville community by creating a safe space, providing health and wholeness services, and offering youth development opportunities.

In poring over the many nominations for Woman of the Year, one nominee stood out, and a one-year award did not seem to do justice to her many years of service and dedication, Cost said.

In honoring Starr with the first “JU Decades of Dedication” award, the president noted that she has served as the Executive Administrative Assistant to the Office of the President for nearly three decades.

“She has served five presidents including Dr. Kinne. She displays absolute decorum, utmost courtesy, tact, discretion and professionalism,” he said.

Over the past four years as the University has grown and enhanced its programs and talent, Starr’s workload has increased significantly, and she adjusted her work hours of her own accord.

“She has learned new methods, expanded capabilities and taken on new responsibilities, and she has done it with good humor and a strong desire to serve the President and Jacksonville University to the best of her abilities,” Cost said. “She is the ‘face’ of our university. Her professionalism and demeanor are matched only by her significant institutional knowledge and understanding of the important interface between JU and the Jacksonville community.”

The overall “100 Years of Leadership & Legacy” event honored Dr. Kinne, who began her Jacksonville University career in 1958 as a humanities professor and became founding dean of JU’s College of Fine Arts in 1961. She served in that capacity until being named JU’s president in 1979, becoming the first female president of a college or university in Florida. With Dr. Kinne as president, JU established what is now the Davis College of Business, the School of Nursing and the Aviation program.