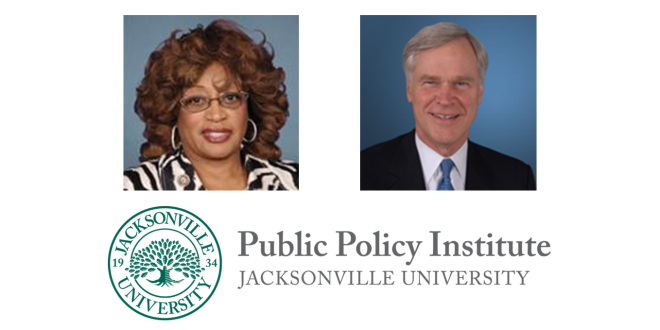 U.S. Reps. Corrine Brown and Ander Crenshaw are set to discuss foreign policy and ISIS, Veterans and Military Affairs, International Trade and the Port, Transportation and more at a Public Policy Institute event Thursday, Oct. 16. The event is free to the public, with a reception at 6:30 p.m. and program from 7-8:30 p.m. on the first floor of the Davis College of Business. Brown, a Democrat, was elected to serve what is now the 5th Congressional District of Florida in 1992. She is a public servant who prides herself on delivering the goods and services of the federal government to her constituents. A native of Jacksonville, Brown served in the Florida House of Representatives for 10 years before coming to Washington. Brown attended the Florida Agricultural and Mechanical University, where she earned a Bachelor of Science Degree. She also received a Master’s Degree and an Education Specialist Degree from the University of Florida and an Honorary Doctor of Law Degree from Edward Waters College. She has been a faculty member at Florida Community College of Jacksonville, the University of Florida, and Edward Waters College. Brown was reelected to the U.S. House of Representatives for an 11th term in November 2012. In the 113th Congress, she serves as the Ranking Member of the Transportation & Infrastructure Subcommittee on Railroads, Pipelines and Hazardous Materials and as a senior member of the Subcommittee on Coast Guard and Maritime Transportation, as well as the Subcommittee on Water & Environment. Brown also serves on the Committee on Veterans Affairs and the Subcommittee on Health. Crenshaw, a Republican, represents Florida’s 4th Congressional District, which is made up of Nassau, Baker and Duval counties. Prior to going to Congress, Crenshaw had a 25-year, distinguished career as a successful investment banker. Representative Crenshaw is a strong advocate for strengthening and rebuilding our military, enacting responsible and permanent tax relief, and standing up for projects vital to Northeast Florida. In his second term in Congress, Crenshaw became the first Northeast Florida member to be appointed to the powerful Appropriations Committee. Now, Crenshaw is the only Florida member to sit on Defense Appropriations. Since defense is a major industry in Florida, Crenshaw is well positioned to assist our military and state. Crenshaw is also the only Florida Member of Congress on Appropriations who chairs a subcommittee. His position is important because every defense dollar spent in our community brings new jobs and new people who buy goods and services from small businesses. The Secretary of the Navy recently recognized Crenshaw’s dedication to the nation’s Sailors and Marines and awarded him their highest civilian honor – The Navy Distinguished Public Service Award. Recently, the Service Corps of Retired Executives (SCORE) awarded Crenshaw the 2014 SCORE Hill Champion Award for his support of small businesses. He has also received the National Retail Federation Hero of Main Street Award, National Association of Manufacturers Award, the Florida Chamber of Commerce Champion of Free Trade Award, and the Spirit of Enterprise Award from the United States Chamber of Commerce every year.

More information on the event can be found by clicking here. RSVP at ppi@ju.edu.