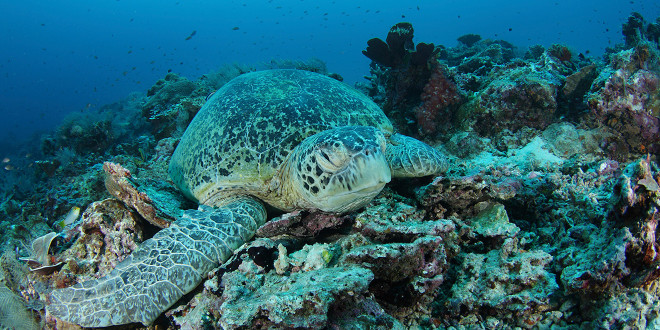 While beach restoration projects help widen beaches by replacing sand lost through erosion with fill from offshore dredges, they occur frequently, and their sand often covers neighboring shallow reefs. Over the years, a variety of materials have been used to restore those reefs, though it has long been suspected that the timing of deployment, type of material and shape or depth of the deployed artificial reef are inconsistent and probably not adequately compensating for reef loss.

What does that mean? Potentially serious long-term consequences for many marine animals.

“The issue is that we are seeing different types and amounts of algae on these reefs that are not optimal as a food source for marine life like green turtles,” said JU Marine Science Professor Dan McCarthy. “Having a different community of algae may not bode well for turtle numbers over time, because they may not use these reefs. We’ve long suspected that artificial reefs don’t exactly mimic what happens on a natural reef, and for the first time we’ve proven that on the Southeast Florida coast.”

McCarthy and students from the Jacksonville University Marine Science Research Institute, along with colleagues including David Snyder from Continental Shelf Associates Inc., Karen Halloway-Adkins from East Coast Biologists Inc. and Dr. Ken Lindeman from the Florida Institute of Technology, are nearing completion of a seven-year comprehensive study of how effective nearshore artificial reefs can be in replacing natural reefs lost to beach restoration.

The project off Southeast Florida’s coast, which began in 2008 and ends this year, was funded with more than $450,000 from the Florida Department of Environmental Protection. Its final results have been delivered to the Florida Department of Environmental Protection, National Oceanic and Atmospheric Administration and U.S. Army Corps of Engineers and are currently under review.

The lengthy research project has the potential to have a large impact on improving artificial and natural reef management along the east Florida coast.

Overall, McCarthy’s student team has been surprised at the number and diversity of animals and algae found in these unique habitats – brittle stars, snails, clams and peanut and polychaete worms, to name a few. They have been responsible for counting the invertebrates and fish in nearly 1,000 samples – more than 30,000 animals total.

“These foundational organisms, in addition to algae, are very important in providing shelter (and sometimes food) to many invertebrate and fish species – some commercially and recreationally” McCarthy said.

In order to help these coastal communities, the research team believes future reefs should be deployed to the shallowest depths possible, and that they be deployed earlier than anticipated to allow the algae community to develop more to the turtles’ liking. The research team also suggests attaching coral transplants to any future artificial reefs to best help restore lost reefs.

These suggestions, along with others, will likely be considered in future artificial reef endeavors in Southeast Florida and may help maintain the diversity and abundance of nearshore marine habitats in these important locations.

“What we don’t want is an adverse impact on marine life in these shallow waters,” McCarthy said. “We run the risk of degrading our marine resources if the mitigation isn’t done properly. More research needs to be done on the placement, timing and shape of these reefs.”