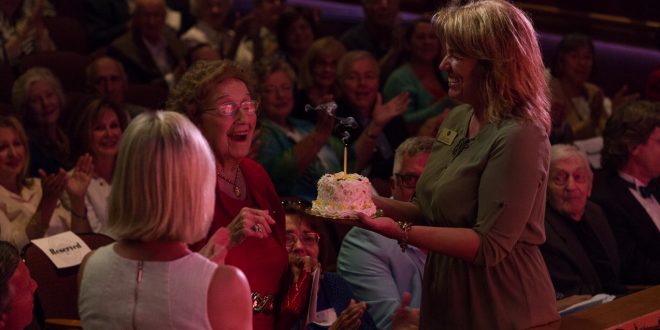 They came by the hundreds, from as far as London, to honor their mentor, muse and inspiration, and to celebrate the start of her 100th year. Students, faculty, staff, alumni and the community gathered on Sunday, May 22, in Swisher Theater to offer what amounted to a two hour-plus birthday party talent show for JU Past President and Chancellor Emerita Dr. Frances Bartlett Kinne, delivering performances ranging from vocals to instrumental music to sketch-comedy to dance to spoken word tributes and more.

The “HeARTs to HeART” party, held a day in advance of Kinne’s 99th birthday May 23, was coordinated by Episcopal Academy’s Director of Fine Arts, Sally Maguire Deming, a student at JU when Kinne was Fine Arts dean.

“We love you, we honor you, we thank you, we uplift you, Dr. Frances Bartlett Kinne,” Deming said, her voice choking up. “(We are) recognizing that your wisdom, actions and, most of all, heart make us all want to do better and be better. God bless you, our mama bear, as you continue to bless others.”

The program even included a taped tribute on the U.S. House floor from U.S. Rep. Ander Crenshaw, and a message of thanks from award-winning television producer Frank Pace ’73 and dancer-model-actress Miranda Arpin ’03 from the set of the Disney Channel TV sitcom Girl Meets World, of which Pace is a co-executive producer and on which Arpin has appeared.

See a video of the full show below:

JU President Tim Cost expressed gratitude for having met Kinne as a 19-year-old freshman on the JU campus, from which he graduated in 1981, and said her gift of leadership style to the world could be summed up in one word: Optimism.

“Ferocious, tenacious optimism. This is not Pollyanna, this is not ‘It’s sunny out when it’s raining,’ this is Fran Kinne choosing to take the positive road … and it’s hard work, but it is worth it.”

For her part, Kinne thanked Deming for putting on the event, and thanked Cost and his administration for the progress occurring at the University. She said Sunday’s event was an inspiration, and “a lot of it was a surprise — but I can’t think of a better surprise.”