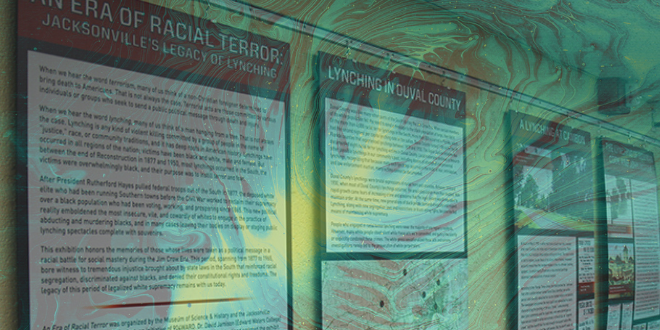 Exploring the Dark Days of Lynching in Duval County

While Black History Month is a time to celebrate the achievements of African Americans, it is also a time to recognize the fortitude and perseverance this community has displayed in the face of adversity. Jim Crow laws, segregation and enslavement are just a few of the transgressions African Americans have faced. In darker days, lynching was one of the most extreme forms of violence against this community, and it is also the topic of an important presentation brought to Jacksonville University by Dr. Jesse Hingson, professor of history and Chair of the Division of Social Sciences.

“Last year, I participated in a series of meetings with the Jacksonville Community Remembrance Project, a grassroots organization of professionals in Jacksonville dedicated to promoting inclusion and diversity in Jacksonville,” Hingson said. “As part of that project, the Museum of Science and History created a traveling exhibit called ‘The Legacy of Lynching: Confronting Racial Terror in America.’  The exhibit has been shown in various parts of Jacksonville. I asked if we could bring it to JU, and the MOSH agreed.”

Originally postponed due to the pandemic, the exhibit ultimately arrived on campus in the fall of 2020. Installed in the lobby of the Swisher Library and in residence until the end of November, the exhibit featured eight illustrated panels focusing on Duval County’s history of racial terror lynching.

This month, JU revisits this topic with a virtual presentation arranged by Hingson and featuring the research of professors Scott Matthews and David Jamison.

Dr. Matthews is a professor of history at Florida State College at Jacksonville. His doctorate is from the University of Virginia, and he specializes in U.S. history. He is also an adjunct instructor at Jacksonville University.

Dr. Jamison is the assistant professor of history at Edward Waters College. His doctorate is in African diaspora history, and his dissertation was on Caribbean slave resistance during the colonial era. He has studied at Indiana University, Bloomington; California State University, Los Angeles; and the University of California, Los Angeles.

Together, Matthews and Jamison will present the findings of their historical investigation into the killings of seven African American men by extrajudicial lynch mobs between 1909 and 1925.  The evidence they have uncovered includes archival documents, newspaper headlines and photographs.  They will also include recent images of local lynching sites.

Their research is complemented by that of Paul Bourcier, former curator of the Museum of Science and History where the parent exhibit on this topic was originally displayed. Funding for that exhibit is supported, in part, by a grant from the Community Foundation for Northeast Florida, Baptist Health, the Florida Humanities Council, and the National Endowment for the Humanities.

If interested in learning more about this topic:
This month’s presentation will take place on Zoom, Wednesday, Feb. 10, 2021, at 7:00 p.m.
For more information, please contact Dr. Jesse Hingson, jhingso@ju.edu.