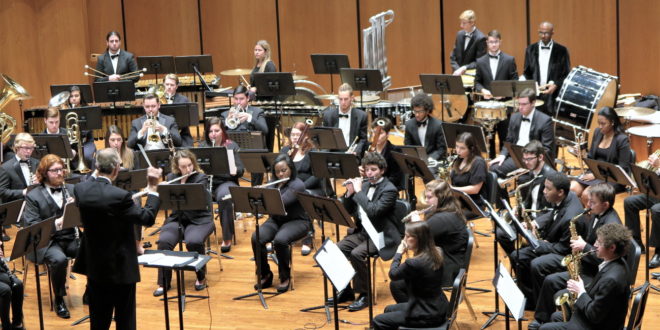 A specially commissioned work based on the history of nearby Fort Caroline highlights an upcoming free concert for the public by the JU Wind Ensemble at 3 p.m. Sunday, April 9, in newly renovated Terry Concert Hall.

The new work by Dr. Fulmer reflects the history of Fort Caroline near JU, with inspiration from Three Voyages by Rene Laudonniere, the French Huguenot explorer who was placed second in command to Jean Ribault in the French expedition to Florida in the 1560s. The vocal text depicts old-world picturesque descriptions of the area surrounding Fort Caroline according to Rene Laudonniere, and ancient period writings in Northeast Florida. Birdsong plays an important part of the instrumental writing. Florida bird songs are transcribed to musical notation and assigned to conventional instruments by the composer.

Dr. Daniel Fulmer is a graduate of Stetson University, Florida State University and the University of Miami. His doctoral research, Composition as a Generative Process, is included in the widely used textbook Psychological Foundations of Musical Behavior by Boyle and Radocy.

Dr. Fulmer is a composer of orchestral and choral works with many performances including Symphony No. 4 (In Memory of Loved Ones Who Passed Away), which premiered at Carnegie Hall in New York, April 2002, and was read by the Jacksonville Symphony as part of their 2004 Fresh Ink Florida Composers Symposium. Other past works by Fulmer that received premieres are Prophecy: The Opening of the Seventh Seal, for large orchestra; Lamentum, Music of Mourning and Consolation, scored for soprano, chorus, and chamber orchestra; and March to Babylon commissioned through James Croft at the FSU School of Music and performed by the Lincoln High School Band.

Other works on the concert include Mayflower Overture by Ron Nelson, and Latin-inspired music, including Vientos y Tangos by Michael Gandolfi, and music by Arturo Marquez and Clifton Williams.

The JU Wind Ensemble, directed by Associate Professor of Music Artie Clifton in the College of Fine Arts, is a 50-member group of wind and percussion players who study and perform music from the traditional and contemporary wind band literature.