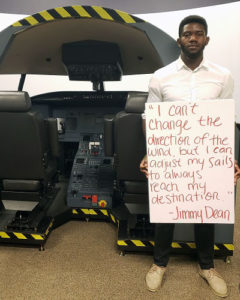 Ngog Nliba Nguimbous, a senior aviation major at Jacksonville University (JU), has had a fascination with airplanes for as long as he can remember. “Since I was a kid, I always loved airplanes, but even more than that, I wanted to make sure people were safe,” he said. “When I was really little, I actually wanted to be a bodyguard.”

Originally from Cameroon, he began American schooling in fourth grade at the U.S. Embassy American School of Yaounde (ASOY). Because he was accustomed to the American system, it made more sense to him to attend college in the United States.

He began to search for universities where he could study aviation and play soccer. “JU initially drew me in because they made the process of applying so easy, and the aviation program was no different,” Nliba said. “Captain Mark Willette would send emails asking if I needed any help during the application process and seemed so excited to have me in the program. When I was accepted, I didn’t think twice about coming here.”

When Nliba started school at JU, he didn’t know much about aviation other than the fact that it interested him. As a senior, he has participated in research and gained first-hand experience with specialized technology like flight simulation.

“Learning is a gift, and I feel like JU’s Aviation program has made me a better person because of the knowledge and skills I’ve gained.”

Nliba has researched topics like the history of aviation, the impact of war on aviation, and the effects of  events like 9/11 on security practices. He has spoken with airport managers and pilots about their personal experiences and general operations. “I’ve interviewed so many people in the profession that I feel like I have my foot in the door already,” he said. 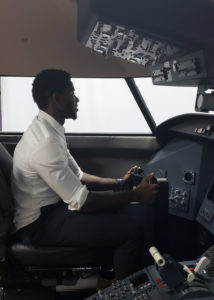 Perhaps the most exciting opportunity that Nliba has accessed through the aviation program is the flight simulation room in the Davis College of Business. In the simulation, students can practice taking off, flying, and landing. So, when the time comes to fly an actual aircraft, students are more comfortable. “No one gets to join the aviation program and then go out and fly an airplane the next day,” Nliba said. “The simulation makes you feel like you are in a real cockpit. You can adjust weather conditions and flight patterns so you’re ready for anything in the real situation.”

Flying into the Future

One of Nliba’s favorite experiences in the program was being a part of the Women in Aviation group on campus. He and his fellow organization members were able to take elementary school girls to the airfield and give them rides in the Cessna aircraft. He saw it as the opportunity to inspire young women to dare to be bold and develop interest in something that is usually perceived as masculine. “Aviation isn’t a profession that many women choose, so we want to give young girls exposure to exploring the skies and possibly developing an interest in flying,” Nliba said. “I hope that it was a memorable experience for them and that maybe some will choose to become pilots in the future.”

Nliba plans on obtaining his master’s degree at JU and staying in the U.S. to pursue a career in aviation management. “There is so much more to aviation than flying,” he said. “I want to be a part of the process that makes sure equipment is safe, the airport is secure, and people can safely get where they need to be.”