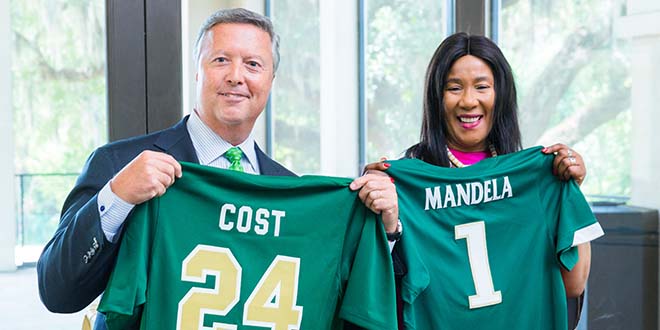 What’s the significance of teaching a farmer in a remote region of Africa how to grow a better potato?

For Dr. Makaziwe Mandela — humanitarian, successful businesswoman, and daughter of the late South African President Nelson Mandela — it’s an effective tool that can help break the cycle of poverty for millions of people and build better, self-sustaining global communities.

On July 18, 2019 — the day that is officially known as Nelson Mandela International Day — Dr. Mandela shared personal experiences from a challenging childhood, thoughts on leadership, and a vision for continuing her father’s legacy, as she accepted the Jacksonville University 2019 Presidential Global Citizen Award in Terry Concert Hall.  It also happened to be Nelson Mandela’s 101st birthday.

“The idea that Dr. Mandela would come here… and bring us all together so that we can think about poverty, and food and education — and the link between those — is an extraordinary opportunity,” said Jacksonville University President Tim Cost as he introduced Dr. Mandela.

“Iniquities between rich and poor are increasing,” said Dr. Mandela, who co-founded House of Mandela Family Foundation, an organization that continues Nelson Mandela’s work towards unity and compassion across global races, religions, and genders. “If you want social justice in our societies, in our communities, in our countries, we have to deal with the issues of how we address the iniquities in society.”

Dr. Mandela works closely with Khalil Osiris — author, social activist and founder of the non-profit Reflecting Freedom — who helped organize Mandela’s visit to Jacksonville and who advocates for transformational change in others through lessons learned in his own life.

Osiris, who shared his own story with the audience in Terry Concert Hall, spent 20 years in prison for armed robbery. During incarceration, he turned his life around, emerging with a deep understanding of what he calls “self-imposed prison.” He challenged the audience to consider the power of personal reflection and the freedom that comes from owning one’s choices — good or bad.

With the help of devoted changemakers such as Osiris, Dr. Mandela works to help communities rise above poverty. The mission has many elements — modern farming techniques, manufacturing, and most notably, education. But, she added, “education alone cannot be a great equalizer if we don’t deal with the iniquities in society.”

“One of the things that people don’t know about my father, is that my father, aside from a politician and a statesman, was an avid farmer…Through food security, we are going to teach local farmers to be commercial farmers,” Dr. Mandela told the crowd. She explained that teaching farmers sustainable agriculture methods —  how to produce their own seeds and when to sell their cattle at the market — strengthens the local and regional food supply and the broader economy.

“My exposure here taught me to have a voice, to have opinions, to speak up, to challenge even my father at times.”

Dr. Makaziwe Mandela on being educated in the U.S.

After studying in South Africa, Dr. Mandela received a Fulbright Scholarship to earn her master’s degree in sociology and Ph.D. in anthropology from the University of Massachusetts-Amherst.

“My exposure here taught me to have a voice, to have opinions, to speak up, to challenge even my father at times,” Dr. Mandela shared. After graduating, she returned to South African and went on to hold senior positions at the University of Witwatersrand, the Development Bank of Southern Africa, and the Industrial Development Group in South Africa.

As Nelson Mandela’s oldest living daughter, the legacy of her father now rests firmly on Dr. Mandela’s shoulders, and she carries it with strength and grace. No small feat, and one that she didn’t welcome when she was younger.

“I grew up angry and bitter. I did not understand why he chose politics over us. It was only… in my mature years, that I could appreciate what my father sacrificed, because South Africa wouldn’t be where it is today,” she said.

Dr. Mandela’s message was one of compassion, unity and collaboration, noting that her father believed in learning from other leaders and working hand-in-hand with others to achieve a greater purpose.

“My father and his colleagues were influenced by the works of other leaders who fought for freedom. Like Martin Luther King. Like JFK. Like Ghandi. And he didn’t do it alone. He did it with other people,” she said.

His example strongly influenced her own path to becoming an international humanitarian and an influential changemaker. “I’ve come to realize, we cannot walk the path to creating better families, better communities, neighborhoods, societies, alone. We’ve got to have people of like minds to hold hands, to work together,” she said.

“I am going to South Africa better… for having set my footprint in Jacksonville.”

Drawing comparisons with her own ethnically diverse home country, Dr. Mandela offered a poignant perspective on the political and social environment within the United States, and the way other nations currently perceive the U.S.

“America is a land of immigrants whether you like it or not. And it’s not going to stop now,” she said. “The founding fathers of this country set up this country to be a country of social justice, to be a country of compassion and caring. That’s why the world has so loved and admired America. But we are beginning to ask what has happened with this beautiful experiment that is America. And so I’m saying to everyone who is here: we need to stand up for what is right.” The audience responded with deafening applause.

In a moment of humor, Dr. Mandela admitted she knew very little of Jacksonville, Fla., before coming to celebrate Nelson Mandela International Day at JU. “I only knew Miami,” she quipped, as the audience erupted in laughter. “I am pleasantly surprised about this little jewel that is Jacksonville.”

“I think there are wonderful stories in this city. And I want to say, I am going to South Africa better — a better person, a much more exposed person — for having set my footprint in Jacksonville.”

After the award ceremony, Dr. Mandela, daughter Tukwini, and Osiris attended a celebratory luncheon at the River House, where invited guests enjoyed a more intimate “fireside chat” between Mandela and President Cost. Tickets sales supported the charter formation of the Mandela Family Scholarship Endowment at JU.

About the Presidential Global Citizen Award

The Jacksonville University Presidential Global Citizen Award is presented to an extraordinary, visionary leader whose impact is felt well beyond the bounds of their recognized responsibilities. This unique individual fully embodies the University’s ideal of fostering globally engaged citizens, bringing to bear their exceptional talents to create new opportunities to lead, live, and learn.