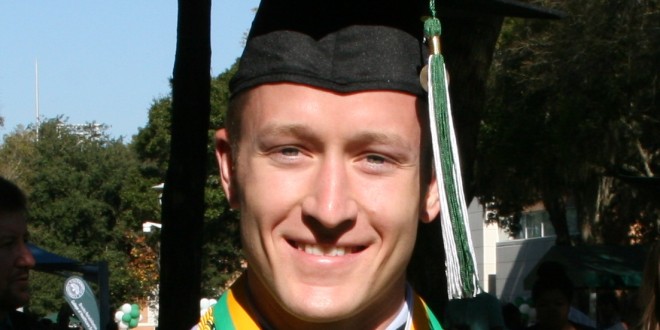 Congratulations to Daniel Jacob Gulbransen, 24, of Appleton, Wis., who was awarded the Fred B. Noble Gold Medal for Scholarship at Jacksonville University’s fall 2015 commencement ceremony Dec. 12.

Daniel enrolled as a student-athlete in 2009 to play centerfield on the JU Dolphins baseball team, and was a 2010 freshman All-American, two-time Capital One Academic All-American and 2012 Atlantic Sun conference scholar-athlete of the year.

On March 13, 2011, he made ESPN’s “Top 10 Plays” with a Willie Mays-style over-the-shoulder catch at JU’s Sessions Stadium that has to be seen to be believed.

After playing in the Houston Astros minor league system, Daniel enrolled back at JU in the fall of 2014 with renewed focus and energy to study kinesiology. He is a member of the Kinesiology Student Society and Phi Kappa Phi National Honor Society.

Daniel completed 215 hours of internship experience at the Naval Branch Health Clinic in Mayport, Fla.; 135 hours at Premier Physical Therapy and Rehabilitation of Jacksonville; and 40 hours with the Houston Astros’ minor league rehab coordinator. His goal is to complete a doctorate in physical therapy and serve as a military physical therapist.