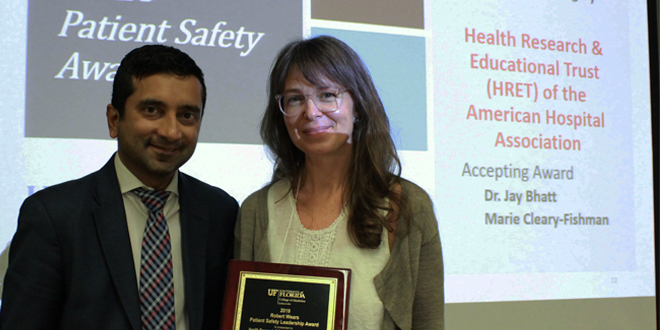 The family of the late Dr. Robert Wears were among the Forum’s VIP guests and helped recognize the three recipients of the 2019 Robert Wears Patient Safety Award. The award is granted to a volunteer, an individual, and an organization, each exuding the tenets of Wears’ work and legacy in patient safety.

In 2010, Wears received a Robert Wood Johnson Foundation Investigator Award in Health Policy Research to fund his own studies on patient safety and became one of the leading voices in the patient safety movement. Still Not Safe: Patient Safety and the Middle-Managing of American Medicine captures the early history of the movement in American medicine and is co-authored by Dr. Kathleen Sutcliffe. Wears passed away during the final editing phase of the book, which is now available through the Oxford University Press.

Recipient in the Individual Category:

A champion of integrative models for practice, research, and education, Barnsteiner is a nationally-recognized voice in today’s patient safety movement. Beyond her many degrees from the University of Pennsylvania and the University of Michigan, she also served as Director of Nursing for Translational Research at the University of Pennsylvania Health System. Her work regularly appears in the American Journal of Nursing where she serves as Editor of Translational Research and Quality Improvement. Barnsteiner led the Forum’s presentation of “QSEN in an Amazon World.”

Recipient in the Volunteer Category:

In addition to her role as founder, she serves as president of Consumers Advancing Patient Safety. Her trailblazing began in response to the death of her young son Lewis in 2000 due to medical error. Haskell’s passion for patient advocacy has contributed greatly to quality improvement and lifesaving measures, including serving as the primary architect of the Lewis Blackman Patient Safety Act.

Recipient in the Organizational Category:

HRET is the research and education arm of the AHA and for more than 70 years has in its mission to positively transform health care. President of HRET and Senior Vice President and Chief Medical Officer of the AHA, Dr. Jay Bhatt received the 2019 Robert Wears Patient Safety Award on behalf of the nonprofit.

About the QSEN Institute Regional Center at Jacksonville University

Its third annual statewide conference, the Patient Safety Forum was made possible by Jacksonville University’s premier Quality and Safety Education for Nurses (QSEN) Institute Regional Center, one of only three in the nation. The goal of QSEN is to create an international network of healthcare professionals who contribute to quality and safety educational resources and scholarship.