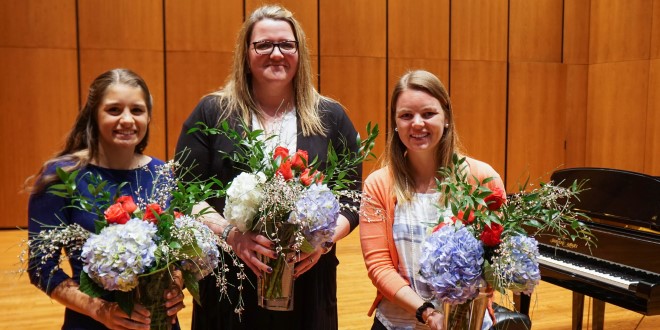 Announcing JU’s Women of the Year

Jacksonville University’s Women’s History Month committee, together with President and Mrs. Cost, hosted an evening to remember as three JU women accepted the distinction of Woman of the Year.

Throughout March, the University joined millions across the nation celebrating Women’s History Month. At JU, those events centered around meaningful discussion, service opportunities, and thoughtful moments. The month-long emphasis culminated with the March 27 celebration and awards ceremony.

“These women did not wait for graduation, or a promotion, or even a nomination to start leading.”

Thirty-five nominees,* including faculty, staff, graduate and undergraduate students, convened at Terry Concert Hall. Each one a participant in JU’s signature women’s initiative—LeadHERship.

“These women did not wait for graduation, or a promotion, or even a nomination to start leading,” Gover said. “They are already doing it. Already stepping up. Already becoming the change they want to see. Already launching a ripple effect that started on this campus.”

2018/2019 Jacksonville University Women of the Year

Nominees from the University’s faculty and staff shared several key attributes. A passion for JU, proven leadership ability, and a dynamic connection to students.

Dylan Myers with Student Organizations, among others across campus, nominated Brundage. “Being new to a department can be intimidating,” he said, “but she came in ready to assist. If Bambi was nervous, it didn’t show. She ensured that people were having a good time while getting their work done. Her passion for helping others shines through.”

Academic success, community service, and campus engagement distinguished each graduate student nominee. “These are remarkable women,” Gover said, “balancing a master’s program, a job, family commitments, and other roles in their communities.”

Wilcox, the 2018/2019 honoree, is working on a Master of Business Administration. She is also investing many hours as a graduate assistant, organizing JU Athletics events, and assisting Senior Vice President and Athletic Director Alex Ricker-Gilbert. Gover said of Wilcox, “She has been a leader since she stepped foot on this campus to join our Women’s Lacrosse team.”

“I can honestly say the many accomplishments of these women made the selection of this year’s Student Woman of the Year a difficult decision,” said Gover.

The annual award, named for Dr. Frances Bartlett Kinne, beloved Chancellor Emerita of the University, is endowed with a $500 scholarship.

Dr. Kinne, soon to celebrate her 102nd birthday, paved the way for countless women and men to exceed expectation. And she did this most emphatically at JU. Generosity, a student-centric approach, and investment in others—all in JU’s DNA and best expressed by a hallmark Kinne phrase: “Life isn’t about me. It’s about helping others.”

“Women of power did not exist in my community. The words fearless, bold, and brave were not a part of my vocabulary. Growing up in Uruguay, fear was inescapable. But when I was 10 years old, my life changed. My little sister was born. She would need a woman to look up to and I decided to be that for her. In that moment, I knew that I was a long way from becoming that woman, but I was willing to change, for her. She teaches me to be fearless, and so I am.”

Those Who Dared to Be Bold

Between the much-anticipated announcements, LBSCFA students graced the stage. Four segments of musical expression began with classical works by Frederick Delius and Amy Beach. The talent of Charly Anne Roper, Angie Acedera, and Carly Mosely set the tone for an evening of reflection.

“Amy Beach is a remarkable woman in the history of music,” Beasley told the audience. She was born into a musical family and was composing simple waltzes at age four. Three years later, her piano studies led to public performances of Handel, Beethoven, and Chopin. When she married, her husband requested that she focus on composing, a rarity for a woman at the turn of the twentieth century. Also a founder of the Society of American Women Composers, her pioneering has inspired generations of composers, Beasley said.

When Melissa Allen and Erin Seaton stepped into the spotlight, they performed pieces from Fun Home and Princess Diaries II. Empowerment, the theme of the third segment, featured powerful performances by Jade Perry and Emily Pate. They brought to life scenes from Once on This Island and 9 to 5.

The ever-popular Joni Mitchell hit, Big Yellow Taxi, followed Fontes-Feraz’ award acceptance, with Charly Anne Roper on vocals and guitar. Originally from Mitchell’s 1970 album Ladies of the Canyon, the song appears in the discography of hundreds of artists. From Canada to Australia and everywhere between, Bob Dylan, Amy Grant, and Counting Crows among them.

“Too Beautiful for Words,” sung by Esther Olivo, earned wild applause as the final piece. “Celie, the main character in Color Purple, has been told she was ugly her entire life, and now that she’s grown, she believes it,” said Beasley. “Another character in the show, Shug Avery, has a very different opinion and shares it with Celie through this beautiful piece.”

JU Faculty/Staff Woman of the Year