Home » All Sections » All for a good (Arlington 20/20) cause: How JU’s deep connections have inspired the Nelson family’s computer gifting in community 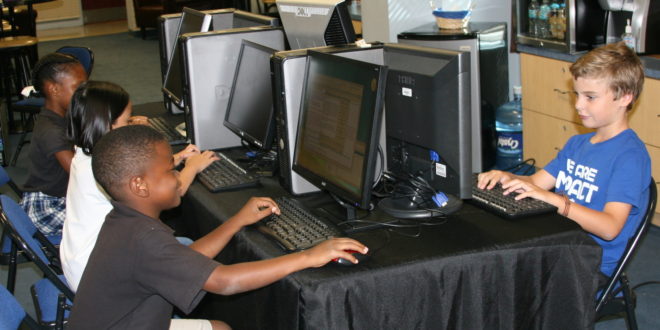 All for a good (Arlington 20/20) cause: How JU’s deep connections have inspired the Nelson family’s computer gifting in community

Helping lift the community around it is a top priority for Jacksonville University, and Arlington 20/20 has become one of the prime vehicles for doing just that.

The initiative is an outgrowth of Renew Arlington, a program to boost the area that was jump-started in 2015 by the City of Jacksonville and JU. Its mission is to bring “measurable spiritual, community, economic and social transformation in Arlington by the year 2020.” 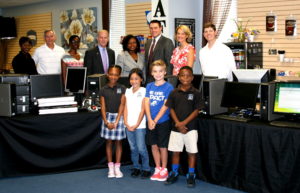 And while JU invests in the community through financial means and by providing services and donations, one of the key ways it also fortifies Arlington 20/20 is by acting as a nerve center, fostering connections that provide the right spark at the right time to keep the overall mission on track.

It’s that deep engagement and strong community spirit that helps JU create positive steps toward building up the area, and there’s no better example of the University’s ripple effect than a recent effort that united benefactors Greg and Sean Nelson with Impact Church on Lone Star Road.

Greg Nelson, a 1971 JU alumnus, Trustee and President of Nelson Holdings, played basketball with JU legend and NBA Hall of Famer Artis Gilmore and maintains a close relationship with the University. When his son Sean needed a home for dozens of computers being taken offline by the company he manages, Clear Choice Health Care of Melbourne, Fla., it was Greg Nelson’s ties with the University that created the pathway to Impact Church.

He contacted JU, and through its Center for Community Engagement it reached out to the church, which said it could benefit tremendously from the equipment. After Missionary Computer Fellowship in Orlando refurbished the desktops, they were donated by the Nelson family and made ready for excited youths in the Impact Christian Academy learning center to try out.

“My father recognizes a need for outreach to this community,” said Sean Nelson, adding that 100 computers are planned for donation overall in the Arlington area. “We want to help bring it back to what it can be, and this is a small step and perfect opportunity for us to help achieve that goal.”

Computers and access to the internet are resources people can sometimes take for granted, and in some communities there is still great need for that access, Sean Nelson said.

“This would not be possible without JU’s support. It has been instrumental in identifying quality partners like Impact Church and identifying how their mission has symmetries with Arlington 20/20,” said Nelson, who along with his wife, Jennifer, helped deliver and set up the computers at Impact Christian Academy. “We all have the same goal. Through JU’s efforts and partnerships, and using their existing relationships, it’s truly benefiting everybody.” 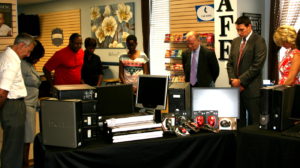 “We feel that this generous donation of computers from the Nelson family will only enhance that partnership,” he said. “Impact Church is working strategically to place special emphasis on mentoring programs for the youth of this community, and I can only imagine the success this program will achieve with the quality of the Nelson family’s donation. We are grateful for the efforts to create lasting change from both Arlington 2020 and the Nelson Family.”

Other outcomes in Arlington resulting from the Center for Community Engagement’s connections include more than 30,000 volunteer hours in the 2015-16 academic year, with an economic impact of more than $700,000.

One of the main goals of Arlington 20/20 is to create service hubs within the Arlington Manor and Woodland Acres neighborhoods to increase access to services such as afterschool education, career planning, preventive care and healthy foods. 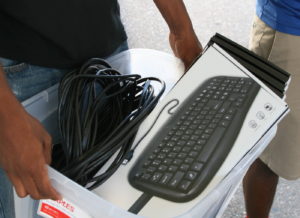 She pointed to the University’s encouragement of growth and improvement with efforts such as helping get a Community Redevelopment Area (CRA) designation for Arlington that steers tax dollars back to the area, investing nearly $30 million into the community with campus upgrades, and enhancing its service and activism with events such as the annual Charter Week.

“When you look at community redevelopment, the first thing you look at is available assets, and then at your needs,” she said. “And JU is a major asset that is offering economic investment in the community.”