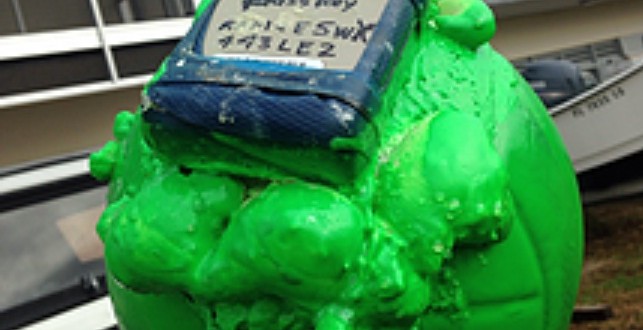 He may have drifted off from a tearful Tom Hanks and never returned in “Castaway,” but JU’s Wilson? He’s back.

The volleyball drifter buoy that a JU physical oceanography class dropped into the mouth of the St. Johns River last spring has inexplicably begun sending out data again.

The green ball’s voyage is designed to help determine where St. Johns River water goes once it meets the Atlantic. It was the subject of stories in The Florida Times-Union and on 89.9 WJCT.

When folks last checked in with it, it was in the Atlantic off Delaware’s coast. But now it’s way out in the North Atlantic and has nearly drifted as far north in latitude as Boston, according to the The National Oceanic and Atmospheric Administration’s 2015 Drifter Track page at http://www.nefsc.noaa.gov/drifter/drift_jml_2015_1.html.

The buoy project is a student project that was led by recent graduates Jennifer Dougherty and Jessica Alexander. Wilson’s GPS information was added to the NOAA’s project that tracks drifter buoys released by many different groups. It’s part of an effort to better understand global currents, said Stalker. A blog about the first part of the project is at http://jenniferjessicabuo.wix.com/judrifterbuoy.