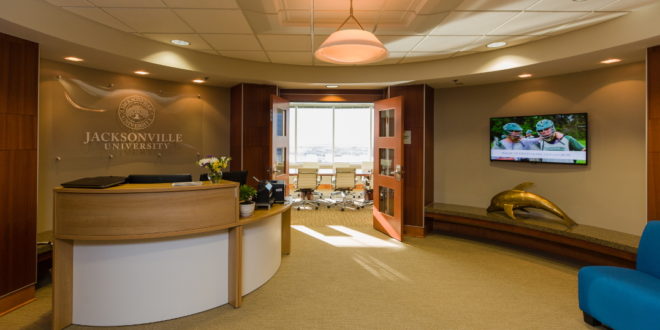 Closing a loop some 80 years in the making, JU Downtown is officially open for business, bringing Jacksonville University programs and faculty back to the epicenter of the city for the first time since the University’s beginnings in 1934. It’s all located on the sparkling new, picturesque 18th floor of the signature SunTrust Tower on Laura Street, with sweeping views of the St. Johns River and the city it traverses.

“We now have the ability to deliver the services that we do so well, by faculty right in downtown, right near what’s going on. … It’s a proud moment for us, a red-letter day for Jacksonville University to reengage its presence downtown,” JU President Tim Cost said at a ribbon-cutting Wednesday, Oct. 11. “We believe in excellence, and we’re going to deliver education where it needs to be delivered, whether it’s sometimes online with Bisk, sometimes on our campus and sometimes downtown.”

With the Nathan M. Bisk Center for Professional Studies as its centerpiece, the 15,000-square-foot JU Downtown currently offers about 100 undergraduate and graduate students programs through the Brooks Rehabilitation College of Healthcare Sciences and the Davis College of Business, with more to come soon. Numerous city, academic and business leaders were present to walk through the facility as it officially opened, just a block from the Northbank Riverwalk and within walking distance of dozens of downtown retail and restaurant locations. Upgrades and renovations to the space were aided by a $274,000 loan from the Downtown Investment Authority, whose CEO Aundra Wallace told attendees the DIA’s unusually quick turnaround on financing showed “just how serious we were about having JU downtown.”

The move has also been sparked by JU’s ASPIRE comprehensive campaign, which has raised tens of millions of dollars for programs and facilities, including a major donation in 2015 from the Bisk Family Foundation — the largest single investment in dedicated online learning in JU’s history. In its 17-year partnership with JU, Bisk has helped more than 4,400 students graduate through the online RN-BSN and five online masters program offerings.

“What this new center does is bring together the modernism of our partnership in the epicenter of a growing city,” Michael Bisk, CEO of Tampa-based Bisk, said just before an inaugural tour of the new space. “We are getting a lot of traction in corporate America, we have good retention and recruitment mechanisms beyond the student’s education, and that becomes a new currency for advancement and job growth. I think being located here, we can keep our finger on the pulse of what the Jacksonville community is doing.” “We want to educate people where they work and live, and it should be accessible for everyone,” said Fry, Undergraduate Director for the Nathan M. Bisk Center for Professional Studies. “The health of any great city is dependent on a thriving downtown campus. Our downtown is filled with great leaders and great businesses, and we want to be part of that energy. For our part, we think JU can bring to you our staff and faculty, consumers, patrons of the arts, and creators of the arts. We also can bring you well-prepared and educated business men and women.”

MacGregor, Graduate Director for the Nathan M. Bisk Center for Professional Studies, heralded the new campus as a landmark example of partnership among higher education, private enterprise and public investment. “We embarked on a vision in which JU Downtown aims to connect the citizens of Jacksonville to the global society through higher education,” she told audience members. “Together with Bisk, JU has become a thought leader in online education. We’ve eliminated silos and are bringing faculty innovation into reality.

And while programs through the Brooks Rehabilitation College of Healthcare Sciences and the Davis College of Business are the first to get off the ground, “At this time, JU Downtown is now ready for any discipline interested in branching out from traditional education,” she added.