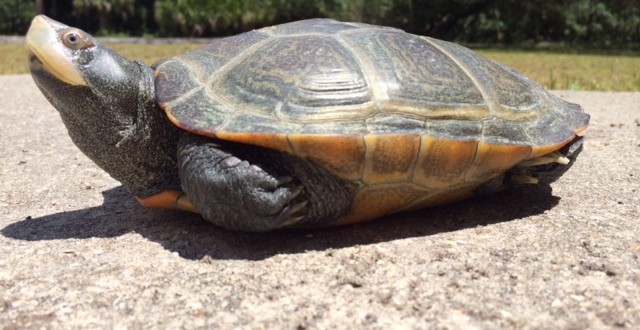 Where are all the Diamondback terrapins on Cumberland Island? Marine Science graduate student Danielle D’amato wants to know, and she’s using a unique method to pay for her research: the crowdfunding site Experiment.com, which accelerates scientific research by freeing up funding bottlenecks and allowing investigators to use more time collecting evidence and less writing grant proposals.

“This work is critical because there is currently no known data for the terrapins on this island,” she says in her project summary at Experiment.com. “This data will aid park biologists as well as future researchers in the conservation of the species. … Hopefully my data will help biologists to protect this keystone species.”

D’Amato needs $1,325 to reach the funding goal for her project, which has a deadline of July 7. As of Monday, June 22, 15 backers had donated $663, a little over half her goal. Projects on Experiment.com must reach 100 percent or more of their goal to proceed, or no one is charged for their commitment. Researchers share their insights and data with backers during and after the project. At Jacksonville University, Renée Rossi, Director of Grant Development, helps students with their submissions. A team of Experiment.com scientists reviews every submitted project to ensure they meet the site’s criteria.
This is the second JU research project using Experiment.com. Tiffany Razo, a graduate student at JU’s Marine Science Research Institute, is using the site to raise money for her project to continue her studies of coral reef health in San Salvador and the main influencing factors of the reef communities there. She’s reached 30 percent of her $5,000 funding goal.

D’Amato earned her bachelor’s degree in biology from JU in 2014, after spending eight years in the Navy, and then decided to pursue her master’s degree in marine science. For her project, terrapins will be captured primarily by using two 6 foot by 30 foot seine nets with a center basket, 25 modified crab pots, and hand capture. Sex, age, and weight of individual turtles as well as nest location and clutch size of nesting females will be recorded.

“The funds raised through this campaign are critical to the completion of my masters thesis,” she noted. “I have always been interested in critters; from a young age I was catching snakes and frogs and chasing my younger sisters around the yard, occasionally bringing home the sick and injured animals I encountered.”