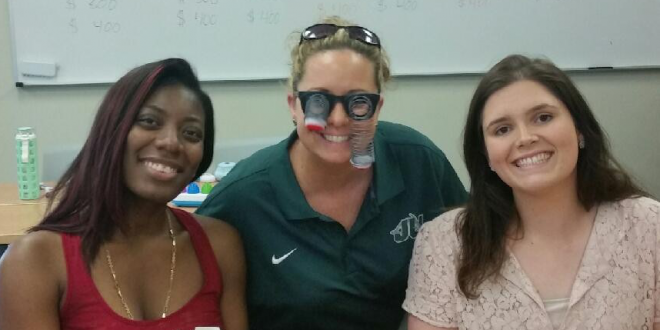 Prof. Amber Santos doesn’t want her pediatric nursing students to stress. If it takes wearing a fake nose and mustache to get that point across, she’s up for it.

The Director of Undergraduate Programs for the School of Nursing has hosted “Peds and Popcorn” for her undergraduates, bringing popcorn, drinks, candy and games — and yes, silly disguises — so the students can interact and learn while having some fun at the same time. Santos tries to bring her love of learning and working with students to each of her classes.

“I wanted to remind our students that they can still be young at heart. Making learning fun by playing games is a great way to alleviate stress. We reviewed material from the pediatric course in a fun way that I feel will help them truly learn the content,” she said. essors care about their students and will do “whatever it takes” to help them learn, Santos said, and it’s important that the students see that they care through their actions.

“And, making memories and building relationships is a priceless part of the student experience at JU,” she added. “The relationships they build with staff, faculty and classmates can last a lifetime.”

“The Peds and Popcorn activity was a fun and interactive way to test our knowledge. I discovered that we have quite a competitive bunch.”

“It was a much-needed interactive learning opportunity.”

Santos has been with the School of Nursing in the Brooks Rehabilitation College of Healthcare Sciences for more than four years. A JU alumna – she earned her BSN in 1998 and MSN and MBA in 2006. She was an adjunct pediatric clinical instructor for JU prior to accepting a full-time position as a Clinical Assistant Professor of Nursing in October 2012. Santos has served as the Director of Undergraduate Programs for the School of Nursing since June 2014. She worked as a Pediatric nurse for the majority of her career in the Neonatal Intensive Care Unit (NICU) and outpatient specialty clinic as a research nurse and manager. She has also worked in pulmonary research for more than seven years, and hematology/oncology research for three years.