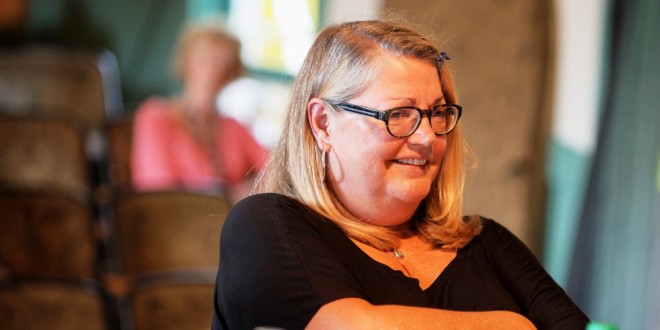 Deborah Jordan, an Associate Professor of Theatre, was one of two playwrights-in–residence chosen from 500 applicants nationwide to take part in the 2015 Seven Devils Playwrights Conference this summer at the Alpine Playhouse in McCall, Idaho.

A team of readers sorted through the play submissions, and conference Artistic Director Jeni Mahoney estimates she read through 150 plays.

“We had these two people who are both extremely passionate about what they had written but it wasn’t in a place to do the staged reading yet,” she told The Star-News of McCall. “We wanted to offer them the opportunity to do their work, to be around people who were doing that work and learn the environment but without the pressure of actually having a performance.”

Both Jordan and playwright-in-residence Jenny Sternling of Boise were provided with a director and a dramaturg who consulted with the writers and helped edit their work.

“It’s like you are getting all these free lessons and advice from all these experienced playwrights,” Jordan, who is program head for acting and directing in the College of Fine Arts’ Theatre Department, told the newspaper. Her play, “The Calling,” inspired by her older sister who decided at age 49 to become a Catholic sister, is based on the lives and journeys of the nuns of St. Gertrude Monastery in Cottonwood.

“I feel like I’ve developed and discovered the tools I need,” Jordan said. “Part of it is just the openness of everyone encouraging you to succeed in this safe, magical environment they’ve created here.”