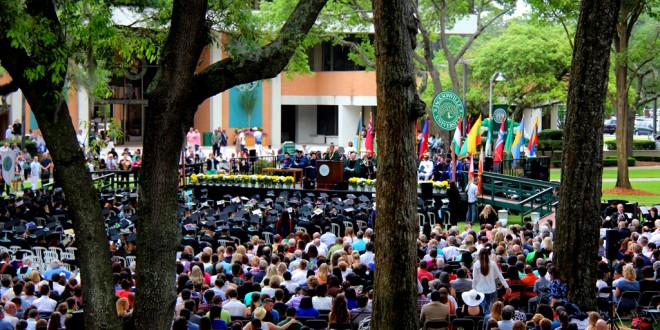 Jacksonville University will bestow degrees on nearly 400 students on Saturday, Dec. 12, one of the largest graduating classes ever for a Fall Commencement at the University.

Dr. Frances Bartlett Kinne, Past President and Chancellor Emerita of Jacksonville University, will offer a keynote address to the graduating class (see full biography below).

Renowned for the progress she oversaw at JU and for the remarkable list of dignitaries and celebrities she brought to the University, Dr. Kinne has said one of her biggest motivations in life is to show others how persistence combined with their own unique makeup can lead to incredible outcomes. One of her oft-repeated quotes is “Go out and make the world a better place.”

Dr. Kinne is an education trailblazer whose accomplishments include being the first female president of a college or university in Florida and the first female College of Fine Arts Dean in the world. At 98, she is believed to be the oldest known person to deliver a commencement speech to a graduating class at a masters-level university.

“I didn’t use to talk about my age — until I hit 90,” she said. “Now I think it’s an inspiration to others to see how much can be achieved in life. I’m looking forward to speaking to the students.”

Those planning to attend the ceremony on the Science Green should arrive early for a good seat. Live-streaming video of the event will be available at http://www.ju.edu/commencement. Look for live updates on Twitter at @JacksonvilleU, and use the hashtag #JUGrad for social media posts.

During the celebration, the Fred B. Noble Gold Medal for Scholarship, first awarded in 1957, will be given to the undergraduates who have earned the highest GPA in their class. The Senior Class Gift will be announced, and Capt. Neil Karnes, new JU NROTC Commanding Officer, will present officer candidates for commissioning.

New this year is the Faculty Corner immediately following the celebration, held adjacent to the new Nelms Plaza, where students can meet up for photos with their favorite professors.

Another new graduation tradition – The Senior Stroll – will be held at 3:30 p.m. Friday, Dec. 11, at Dolphin Plaza behind the Howard Building. All graduates are warmly welcomed for a group photo, champagne toast and festive march through campus to the Graduate Reception at 4:30 p.m. at the River House – sponsored by the JU Alumni Association. Light hors d’ oeuvres and refreshments will be served, with faculty and administration in attendance. Attire is business casual. Caps and cords are encouraged.

FRANCES BARTLETT KINNE’S more than half-century of service and leadership at Jacksonville University has changed lives and the course of higher education in Northeast Florida and beyond.

She began her JU career in 1958 as a humanities professor, was selected as founding dean of JU’s College of Fine Arts in 1961 and served in that capacity until being named JU’s president in 1979, becoming the first female president of a college or university in Florida. With Kinne as president, JU established what is now the Davis College of Business, the School of Nursing, the Aviation program, and the College of Arts and Sciences, among others. She is listed in more than 25 Who’s Who and similar publications, as well as Two Thousand Women of Achievement, Community Leaders in America, Notable Americans, the Directory of American Scholars, and Personalities of the South. Dr Kinne was also the first female President of the Jacksonville Rotary Club, and was inducted by former Florida Gov. Bob Graham into the Florida Women’s Hall of Fame. In 2015, she was awarded the Lifetime Achievement Award at the 12th Annual Women of Influence Awards in Jacksonville.

Dr. Kinne was responsible for bringing Bob Hope and Jack Benny to Jacksonville University for their only appearance together on a college campus. Other notable people who Kinne brought to JU were President Gerald Ford, Winston Churchill, the Rev. Billy Graham, Linus Pauling, Charlton Heston, both “Dear Abby” and Ann Landers, and Maestro Arthur Fiedler (17 times). She also got George Steinbrenner to bring his New York Yankees baseball team to play in an exhibition game against the JU team to raise funds for the University.

Dr. Kinne, now 98, is most proud of her connection with students. She continues to counsel and inspire hundreds of alumni, as well as academic and corporate leaders, who keep her phone and email server busy on a daily basis. Many academic leaders from around the nation still regard her as a knowledgeable advisor on confidential management issues.

Among her favorite quotes are: “Go out and make the world a better place” and “Life isn’t about me. Life is about others.”

Nov. 1, 2012, was proclaimed “Dr. Frances Bartlett Kinne Day” by the City of Jacksonville, in part because “Dr. Fran Kinne is one of our city’s most distinguished citizens and has contributed to Jacksonville in countless ways.” In addition, she was the first subject for the Emmy Award-winning “Jacksonville Legacy Series” on public television, documenting the region’s most prominent leaders.

The daughter of a newspaper publisher and librarian, she taught piano, music and even served as a public school orchestra conductor before completing college. Dr. Kinne is an Iowa native and graduate of Drake University with degrees in music education, and earned a doctorate from the University of Frankfurt in Germany.