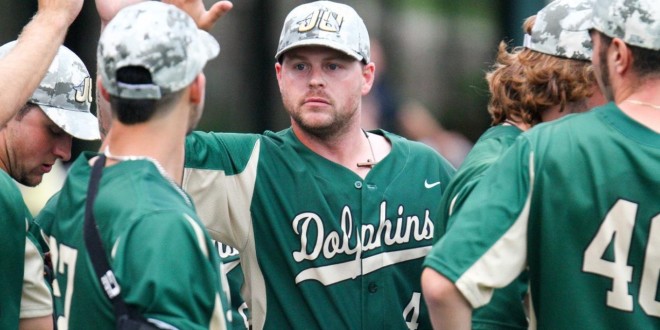 Holcomb, who turns 35 next week, last started a game as a senior at Mason High School in Michigan, then served 17 years in the U.S. Navy, with multiple tours overseas in places like Iraq, Afghanistan, Pakistan and Africa.

In the back of his mind during all of it was always that dream of starting a Division One baseball game.

After being accepted into the Medical Enlisted Commissioning Program in JU’s School of Nursing, where he’ll come out an officer in the U.S. Navy Nurse Corps, he decided to enroll as a student-athlete, after which he’ll serve his country for at least another six years. He was cleared through the NCAA and earned a spot on the Dolphins’ roster. That led to head coach Tim Montez giving No. 43 the ball to start Tuesday’s game against visiting Georgia Southern.

“It was an emotional experience, but I had fun with it,” Holcomb said after the Dolphins 5-3 loss, in which he faced one batter, throwing a strike on his first pitch and taking the count to 2-2 with sidearm-delivery fastballs before yielding a single. “I thought about my family, I thought about these guys that rally around me, and that’s what it was about for me.”

The crowd let out a cheer as he handed over the ball to Montez, trotted to the dugout and was embraced by teammates who donned the camo hats chosen by Holcomb as part of the starting pitcher selection for uniform choice.

Watch the moment below:

“I’m like a little freshman trying to get that spot and do some damage out there on the mound,” said Holcomb. “Where I am at in my life, I’ve surpassed a lot of my dreams. I found a role around here and stayed attached to the program and the guys welcomed me in.”

See more about this story on the @JUBaseball Twitter feed.