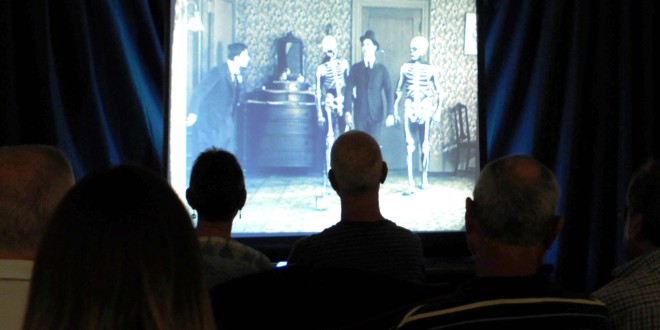 Letting viewers “hear” silent films through original music is at the heart of a JU College of Fine Arts Division of Music project benefiting from a $10,000 grant by the Cultural Council of Greater Jacksonville.

JU Assistant Music Prof. Tony Steve, one of only a few composers keeping alive the art of scoring silent film music, will lead JU student and alumni players as they synchronize live music and sound effects to movies shown in the “SPARK District,” a Cultural Council initiative focusing on growing the economic vitality of downtown Jacksonville.

Watch a short video about the project here.

“This is an important moment for JU’s music area, as we can move forward with the collaboration of media and student performance in a professional setting,” said Steve, a JU Music alumnus. “Through these original performances, JU will demonstrate how music can communicate action, theme, plot and emotion just as effectively as the spoken word. Our goal is to prompt audiences to appreciate the genre of silent film while learning about our city’s rich history in movie making.”

“Hearing What Wasn’t Said” is an extension of Steve’s two-year-old “Silent Sundays,” in which he has composed and led musicians as they accompany silent films at screenings held at Norman Studios in Old Arlington. The studio, Jacksonville’s only surviving silent film complex, was founded in 1920 and was among the nation’s first to produce films starring African American characters in positive, non-stereotypical roles. (Read a Q&A with Steve by Christina Kimble about his silent film musical work here.) Meanwhile, Steve, who teaches percussion and composition at JU and has performed with the Jacksonville Symphony, Israeli Festival Orchestra, Xavier Cugat Orchestra and Henry Mancini, among many others, as well as toured with “A Chorus Line” in Europe, is completing a dissertation covering silent film and percussion-period and non-period performance practice.

For the MOCA screenings, he said, “We’ll use a variety of instruments, original scores, classical melodies and sound effects to demonstrate how music was used to communicate and enrich the entertainment experience.”

According to Steve, audience engagement will be a huge part of each event, especially when showing the same film twice but playing a separate score each time. For example, he said, one score may represent a performance style aligning with the 1900s, and one may be an original score written by a JU student that uses different instruments. “The two scores will enable the audience to view the same film in different contexts, demonstrating how varying tempos and instruments can emote opposite feelings even with the absence of dialogue.”

Each screening will also be followed by a brief audience Q&A with Prof. Steve.

This is JU’s first award from the Cultural Council’s highly competitive grant program, which in 2016 will use $70,000 of funds raised from the recent Arts Awards Gala including a sponsorship by Florida Blue. Projects were sought from nonprofit organizations and individual artists from the five-county First Coast area to ignite the walkable urban district with arts and culture.

For more on the Cultural Council’s SPARK grants, click here.